Valued at $25.6 million, the contract is expected to be completed by June 2023. Per the terms, through this modification, Sikorsky will offer non-recurring engineering efforts to integrate, test, and qualify re-designed data concentrator and blade fold distributor units for CH-53K jets.

The majority of work related to this deal will be carried out in Torrance, CA.

Benefits of the Contract

Countries globally have been reinforcing their military resources due to intense geopolitical tensions and amplified terrorist threats.

Among other combat arsenals and weaponries, military helicopters have also been gaining importance owing to advancements and integration of new tactical, logistical features. This has provided ample opportunities for Lockheed Martin to win production and modification contracts for helicopters in recent times. The latest contract is a bright example of that.

Such contract wins are likely to drive revenues from the Rotary and Mission Systems business segment, which comprises the Sikorsky helicopters and reported a 6% annual improvement in its fourth-quarter 2021 top line.

The United States, which is the largest exporter of military weaponries worldwide, is also strengthening military resources. This is quite evident from the fiscal 2023 budget proposal worth $773 billion put forward by the Biden administration for the Department of Defense, with a $56.5-billion planned investment in combat aircraft. Impressively, the defense budget request reflects a 4.1% increase from the fiscal 2022 enacted amount.

NOC stock boasts a long-term earnings growth rate of 6.2%. The Zacks Consensus Estimate for 2022 sales implies growth of 2.6% from the 2021 reported figure.

BA stock boasts a long-term earnings growth rate of 4%. The Zacks Consensus Estimate for 2022 earnings implies growth of 137.2% from the 2021 reported figure.

TXT stock boasts a long-term earnings growth rate of 11.8%. The Zacks Consensus Estimate for 2022 earnings implies growth of 21.8% from the 2021 reported figure.

In the past year, shares of Lockheed have gained 20.2% against the industry’s 31% decline. 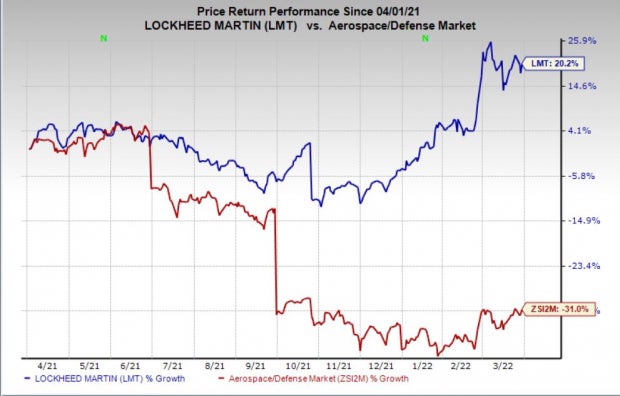