Smart Stocks to Buy on the Dip in April

The market came a long way from the middle of March when the Nasdaq hovered in bear market territory and the S&P 500 was slipping into a deeper correction. Meanwhile, oil prices were skyrocketing and Wall Street appeared on the cusp of an even bigger selloff amid the Russian invasion of Ukraine and imminent rate hikes.

The S&P 500 is now back above its 200-day moving average and down just around 5% from its records, taking into account its 1.6% drop on the final day of March. The tech-heavy Nasdaq ripped off a 14% run off its March 14 lows.

The unknowns and setbacks remain and higher rates should be a drag on stocks. Yet even with the Fed putting an end to rock-bottom rates, 10-year U.S. Treasury yields are barely at three-year highs and well within their range over the last decade. And 2.4% yields are insanely low compared to pre-financial crisis levels.

This backdrop could mean Wall Street will be left chasing returns in stocks no matter what happens on the various economic and geopolitical fronts if they hope to outclimb 8% inflation.

Investors with long-term horizons might want to buy some strong stocks in April and in the second quarter.

Semiconductor maker Analog Devices expanded its reach to help it challenge the leader in the analog space, Texas Instruments, when it completed its acquisition of Maxim Integrated in August 2021. The combined firm’s portfolio features analog and mixed signal, power management, as well as radio frequency, and digital and sensor technologies. ADI boasts around 125K customers globally for its over 75K products.

Analog semiconductors are on the less flashy side of the booming chip space that will remain the backbone of technology and the economy in the coming decades. They play a crucial role in countless devices and industries that next-gen digital semiconductors cannot meet. Analog chips help handle information not easily understood with 1s and 0s, such as temperature, speed, sound, electrical currents, and more.

Roughly half of Analog Devices’ 2021 revenue came from clients in the industrial sector, with 20% in automotive, 15% in communications, and 16% in the consumer markets. Analog Devices executives expect to benefit over the long haul from the constant expansion of automation, electrification (from EVs and beyond), and advanced connectivity. ADI’s revenue and adjusted earnings both climbed by around 31% in fiscal 2021, driven in part by its Maxim deal. 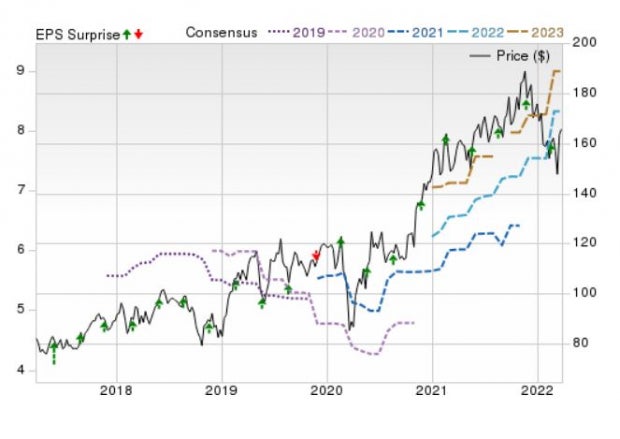 Analog Devices beat our Q1 FY22 estimates in mid-February and analysts raced to up their FY22 and FY23 earnings estimates following the release, with the consensus figures up 11% and 9%, respectively. This bottom-line positivity helps ADI land a Zacks Rank #2 (Buy).

Current Zacks estimates call for ADI’s revenue to climb another 54% this year to $11.3 billion and around 6% higher in FY23. Meanwhile, its adjusted earnings are projected to pop 29% and 8%, respectively.

Wall Street is rather bullish on Analog Devices, with 75% of the brokerage recommendations Zacks has at either “Strong Buy” or “Buys,” with nothing below a “Hold.” Plus, ADI’s Semiconductor-Analog and Mixed industry ranks #16 out of 250 Zacks industries. The firm in February raised its dividend by 10% (its 19th increase in the last 18 years) and it yields 1.8% right now to top many of its peers and the S&P 500’s 1.3%.

ADI shares have climbed 54% in the last three years and 330% in the past 10 years to outpace the larger Zacks technology sector’s 300%. The stock currently trades 11% below its November records at roughly $166 per share, which gives it 24% upside compared to its Zacks consensus price target.

Analog Devices also trades at a slight discount to its five-year median at 19.4X forward earnings. This also marks 30% value compared to its own highs and 10% vs. the Semi space.

Lowe’s and its biggest competitor, Home Depot, have benefitted for years from both the do-it-yourself and professional markets. Lowe’s posted YoY of revenue growth every year since 2010, which includes a whopping 24% expansion in 2020 that saw it surge from $72 billion to $90 billion. LOW then posted another 7.4% sales growth last year as the pandemic housing boom and home spending continued.

Lowe’s comparable sales popped 6.9%, with its digital sales up 18%, and its adjusted earnings up 55% in 2021. The company also managed to improve its gross margin despite rising costs, from labor to products.

LOW’s management projected that is would grow its margins once again in 2022 despite 40-year high inflation. Lowe’s ability to navigate these headwinds helped it raise its bottom-line outlook, even as many S&P 500 companies lower their earnings guidance.

The company’s FY22 and FY23 consensus EPS estimates are both up 4% compared to where they were before its fourth quarter release to help it grab a Zacks Rank #2 (Buy) right now. Zacks estimates call for its sales to climb another 2% in both 2022 and 2023, on top of back-to-back years of massive growth. And its bottom-line outlook is even better, with Lowe’s adjusted earnings expected to climb 11% and 10%, respectively.

Despite rising mortgage rates, Wall Street remains high on the stock, with 13 of the 19 brokerage recommendations Zacks has at “Strong Buys.” Plus, it Building Products–Retail space is still in the top 7% of over 250 Zacks industries. And Lowe’s dividend yield sits at 1.57%, with plans to repurchase approximately $12 billion worth of its stock in 2022.

Lowe’s big pullback also has it right on the cusp of reaching oversold RSI territory, which might cause some traders and long-term investors to dive in. On the valuation front, Lowe’s trades 12% below its five-year median at 15.4X forward 12-month earnings.

This marks 10% value compared to its highly-ranked industry and 33% below its highs over this stretch. In fact, LOW stock is trading at its lowest levels in the past three years outside of the initial covid market selloff.

Buy These Stocks Now to Help Power Your Long-Term Portfolio