Eni SPA (E - Free Report) raised the resource estimates at the Ndungu field in Angola following the drilling of the Ndungu-2 appraisal well.

The Ndungu field is situated on Block 15/06 in the Angola deep offshore basin. Eni operates the block with a 36.84% ownership interest.

The Ndungu-2 appraisal well was drilled three miles away from the Ndungu-1 discovery well. The well encountered 131 feet of net oil pay in the Lower Oligocene reservoirs, with excellent petrophysical properties. Eni carried out intensive data collection to evaluate the maximum potential of the discovery.

The structured and continuous Infrastructure-Led Exploration efforts led by Eni and its partners unlocked the additional potential in Block 15/06. Eni has already commenced production from the Ndungu Early Production development project in the block. A second producer well is expected to come online in late 2022.

Ndungu field development will now be upgraded, subsequent to a gradual process to unlock the overall potential in an optimal way. This will initially extend and increase the plateau of the Ngoma, a 100,000-oil-barrels-per-day zero-discharge and zero-process flaring FPSO.

Ndungu-2 marks Eni’s seventh discovery in Block 15/06 in the past four years. The result demonstrates how Azule Energy can bank on a strong pipeline of projects beginning over the next few years. Notably, Eni recently entered an agreement with BP plc (BP - Free Report) to create Azule Energy — a 50/50 joint venture combining their Angola businesses.

In 2021, Eni and BP announced plans to combine their Angola businesses into a self-funded company. The consolidation is part of the companies’ restructuring of oil and gas businesses amid their transition to a more sustainable, low-carbon economy. It will also help the companies to reduce debt.

The new company will be independently managed. It will have a portfolio of projects, which are likely to begin in the next few years. The portfolio includes the new Agogo and PAJ oil projects in Blocks 15/06 and 31, respectively. BP operates Block 31 offshore Angola.

Shares of Eni have underperformed the industry in the past six months. The stock has gained 7.9% compared with the industry’s growth of 29.6%. 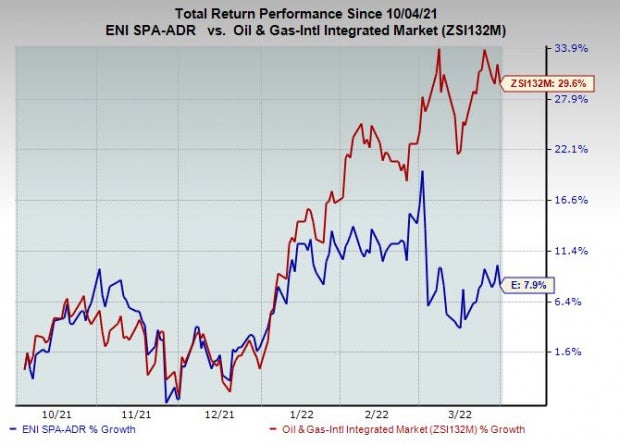 Investors interested in the energy sector can take a look at the following companies that presently flaunt a Zacks Rank #1 (Strong Buy). You can see the complete list of today’s Zacks #1 Rank stocks here.

Total Energies is managing long-term debt quite efficiently and trying to keep the same at manageable levels. Its debt to capital has been declining over the past few years. As of Dec 31, 2021, cash and equivalents were $21,342 million, which was enough to address the current borrowings of $13,645 million.

Sprouts Farmers (SFM) Marches Ahead of Industry: Here's Why