Valued at $1.42 billion, this contract is expected to be completed by Aug 1, 2027. Per the terms of the deal, Lockheed will manufacture THAAD Interceptors and associated one-shot devices for the U.S. government and the Kingdom of Saudi Arabia (KSA).

Through the latest modification, the value of the contract increased from $6.34 billion to $7.76 billion. Work related to this deal will be executed in Dallas, TX; Sunnyvale, CA; Camden, AK; as well as Troy and Huntsville, AL.

Notably, apart from this product line’s well-established market in the United States, THAAD batteries have been deployed in other countries like the United Arab Emirates, Saudi Arabia, Japan, South Korea and Israel. The latest contract win is an example of the solid demand enjoyed by this missile globally.

In March 2022, it was announced that the PAC-3 Missile Segment Enhancement (MSE) interceptor had been integrated into the THAAD Weapon System – resulting in a more tightly integrated, layered missile defense system offered by Lockheed. This should further boost demand for THAAD, thereby ushering in more inflow of contracts for this missile system, which in turn would push up LMT’s top-line results.

Considering the geopolitical scenario, the missile market as a whole is poised to gain. The global rockets and missiles market, valued at $58.3 billion in 2021, is projected to witness a CAGR of 4.8%, to reach $73.8 billion by 2026 per a report by Markets and Markets firm.

Raytheon boasts a long-term earnings growth rate of 10.2%. The Zacks Consensus Estimate for its 2022 earnings implies an improvement of 12.2% from the 2021 reported figure.

Northrop boasts a long-term earnings growth rate of 6.2%. The Zacks Consensus Estimate for its 2022 sales suggests an improvement of 2.6% from the 2021 reported figure.

BA boasts a long-term earnings growth rate of 4%. The Zacks Consensus Estimate for its 2022 earnings suggests an improvement of 137.2% from the 2021 reported figure.

Lockheed Martin, a Zacks Rank #3 (Hold) company, has gained 17.7% in the past year against the industry’s decline of 33%. You can see the complete list of today’s Zacks #1 Rank (Strong Buy) stocks here. 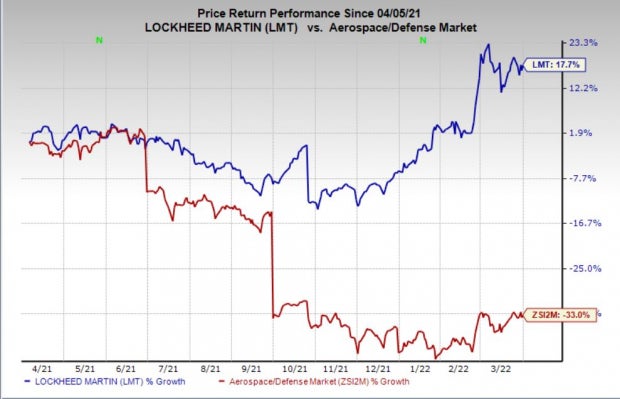