Valued at $650.7 million, the contract is expected to be completed by June 2028. Options included in this deal, if exercised, will bring the cumulative value of this contract to $3.16 billion.

A major portion of the work related to this deal will be executed in Andover, MA.

With the rapid escalation of geopolitical tensions globally in recent times, developed and developing nations have been boosting their defense arsenal significantly. Radars constitute a vital part of this arsenal.

The demand for military radar systems has expanded manifold in recent times, driven by factors like the rise in defense spending of emerging economies, increase in regional tensions and inter-country conflicts that have boosted threats from missiles and aircraft. This in turn has been benefiting radar manufacturing companies like Raytheon, in the form of contract wins, like the latest one.

Lockheed boasts a long-term earnings growth rate of 16.3%. The Zacks Consensus Estimate for its 2022 earnings implies an improvement of 18.3% from the 2021 reported figure.

L3Harris boasts a long-term earnings growth rate of 4.4%. The Zacks Consensus Estimate for its 2022 earnings implies an improvement of 4.9% from the 2021 reported figure.

Northrop boasts a long-term earnings growth rate of 6.2%. The Zacks Consensus Estimate for its 2022 sales implies an improvement of 2.6% from the 2021 reported figure.

The company’s shares have gained 28.5% in the past year compared with the industry’s increase of 16.5%. 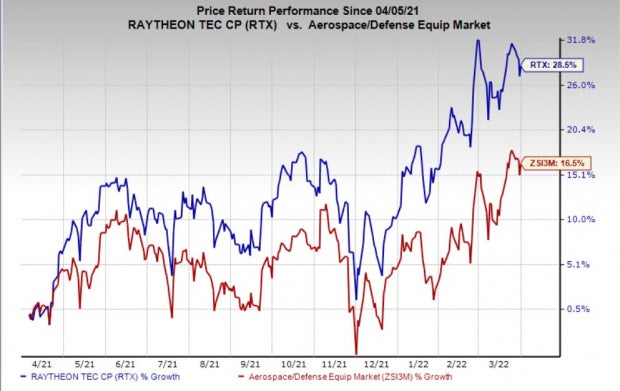