Choice Hotels International, Inc.’s (CHH - Free Report) Cambria brand recently announced the addition of the Cambria Hotel Austin Airport in Austin, TX.  Developed by W2 SF Airport Hospitality Business LP, this marks the brand’s first property in the Central Texas and the sixth property in the overall state. The company stated that the opening of Cambria Hotel Austin Downtown Rainey Street is in the pipeline with an anticipated opening by summer 2023.

With reference to the opening, Janis Cannon, senior vice president, upscale brands, Choice Hotels, stated, "With Texas being one of the fastest-growing states in the country, it's only fitting that we debut our first hotel in Central Texas and the sixth hotel overall in the Lone Star State, following openings in Houston, McAllen, Plano, Richardson and Southlake."

The Cambria Hotels brand is a major growth driver for the company. As of Dec 31, 2021, the number of domestic units in the company’s upscale portfolio expanded 13% year over year, driven by an increase in the unit count for both the Cambria Hotels brand and Ascend Hotel Collection. During fourth-quarter 2021, the company broke ground for four Cambria projects, thereby bringing the total unit count to 57. The company stated that it has almost 60 Cambria hotels open across cities such as Chicago, Los Angeles, New York, New Orleans and Phoenix.

Backed by solid consumer confidence and the attractiveness of Choice Hotels value proposition, the company anticipates boosting the revenue intensity of its system by adding more properties. The company anticipates ramped-up expansion across major U.S. cities. Further, it stated that it has 70 Cambria hotels in the pipeline. In 2022, the company expects to open 10 additional Cambria hotels. 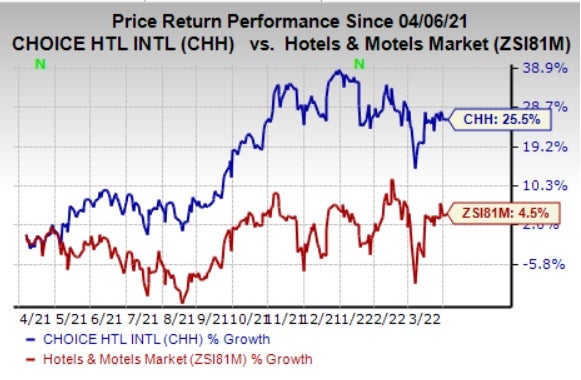 In the past year, shares of Choice Hotels have gained 25.5% compared with the industry’s 4.5% growth.

Funko sports a Zacks Rank #1 at present. FNKO has a trailing four-quarter earnings surprise of 96.2%, on average. Shares of the company have declined 18.8% in the past year.

The Zacks Consensus Estimate for Funko’s current financial year sales and EPS (earnings per share) suggests growth of 22.6% and 26.8%, respectively, from the year-ago period’s reported levels.

Boyd Gaming presently carries a Zacks Rank #2 (Buy). BYD has a trailing four-quarter earnings surprise of 48.8%, on average. Shares of the company have gained 5.9% in the past year.

The Zacks Consensus Estimate for BYD’s current financial year sales and EPS indicates growth of 2.3% and 2.9%, respectively, from the year-ago period’s reported levels.

Bluegreen Vacations presently carries a Zacks Rank #2. BVH has a trailing four-quarter earnings surprise of 425.1%, on average. The stock has increased 31.8% in the past year.

The Zacks Consensus Estimate for BVH’s current financial year sales and EPS indicates growth of 8.3% and 20.8%, respectively, from the year-ago period’s reported levels.