Shares of Halozyme have gained 3.1% so far this year against the industry’s decrease of 12.1%. 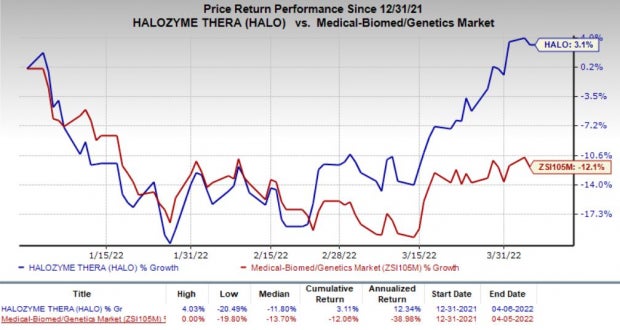 Halozyme mainly derives its revenues from royalties on the sale of drugs developed using ENHANZE. For the past few quarters, royalty revenues have been driven by J&J’s Darzalex Faspro, the SC version of its blockbuster cancer drug, Darzalex, available for intravenous administration. In May 2020, the FDA approved the subcutaneous administration of J&J’s Darzalex, followed by approval in Europe in June.

Several label expansions of the drug have been approved since its first approval and more are likely to happen going forward. J&J has reported strong uptake of Darzalex since its launch, most likely due to the convenience of administration compared to intravenous. The drug is likely to continue its strong growth momentum in the next few quarters, bringing more royalties for Halozyme.

argenx is planning to submit a biologics license application for the same later in 2022.

Halozyme expects to generate $1 billion in annual royalties from its ENHANZE technology by 2027.

Following the failure of its lead pipeline candidate, PEGPH20, in 2019, Halozyme initiated restructuring of its business to support future growth. The restructuring activities have reduced operating expenses in the past two years with the trend expected to continue in 2022.

However, rising biosimilar competition for Roche’s Herceptin and Rituxan is a cause of concern. Lower sales of these drugs amid competition will hurt Halozyme’s royalties going forward. However, potential new drugs and the strong uptake of Darzalex Faspro are likely to offset the loss.

Here's Why You Should Stay Invested in Willis Towers (WTW)