Why Alphabet (GOOGL) Stock Is Worth Holding Onto

Regulators are tightening the screws on big tech and obviously Alphabet (GOOGL - Free Report) can’t be an exception. The company sits on a huge cash hoard and generates ever increasing amounts every quarter. And because of the huge amounts of data it pulls from its vast networks, it can train its machines to generate even more.

Not only that, but It ties up with strategic tech and non-tech players to influence governments, regulatory bodies and think tanks. And it employs batteries of lawyers to pursue any case for years on end while moving on to more advanced technologies that make it difficult to catch.

On the rare occasions that it is forced to pay a fine, the amounts barely make a dent in its cash pile. To be fair, Alphabet isn’t the only one doing these things. Facebook , Microsoft (MSFT - Free Report) , Apple (AAPL - Free Report) , Amazon (AMZN - Free Report) and othersall do their bit to protect their interests. While people may frown on this oligarchic type of power the tech giants seem to enjoy, this is very good for investors who can make big bucks by betting on them for the long term.

Here is a brief account of how Alphabet makes its billions-

Alphabet generates revenue primarily from advertising on its owned properties, on YouTube (which is also owned) and on network member properties (websites that have revenue sharing arrangements with Google based on the search traffic sent their way). These three segments have grown a respective 113%, 253% and 79% over the last five years to $148.9 billion, $28.8 billion and 31.7 billion, respectively in 2021.

It also generates revenue from other Google products like apps and in-app purchases, digital content products, and hardware. This segment, called Google other, is up 156% in the last five years to $28 billion.

A growing contributor to its revenues is Google Cloud, which has grown over 373% in the last five years to $19.2 billion.

Its attempt to diversify revenue sources yielded the Other Bets segment several years ago. And this includes its experiments in driverless cars, healthcare and various other initiatives. This segment has grown 57% in the last five years to $753 million.

Now let’s see how each of these divisions has performed versus expectations in recent quarters. Note that segment-wise estimates may include input from a smaller number of analysts than the Zacks Consensus for revenue or earnings.

So in the last five quarters, we find that search revenue on Google-owned properties has consistently topped analyst estimates at an average rate of 6.4%. Excluding the June 2021 quarter when the segment surprised by over 10%, the average surprise comes to 5.3%.

YouTube revenues beat estimates by 4.4% on average but it’s worth mentioning that this segment has been quite unpredictable with surprises ranging from -1.4% to +9.9% in the last five quarters.

Google other revenue recorded a smaller average surprise of 4.2% including the March 2021 quarter when it surprised by 15.6%.

While Google Cloud has been a star performer, it has performed closer to analyst expectations than the other segments. The average surprise for this segment is 1.1%.

Other Bets contribute only a small percentage of revenue and possibly because of relatively fluid operating models and evolving business plans, analyst estimates have not been reliable indicators of performance.

Alphabet’s share price has rewarded its long-term shareholders. And so we see that in the last five years, the shares have appreciated 224.4%. They have climbed 21.4% in the past year. The following chart illustrates how Alphabet shares fared after the recession in 2008-09- 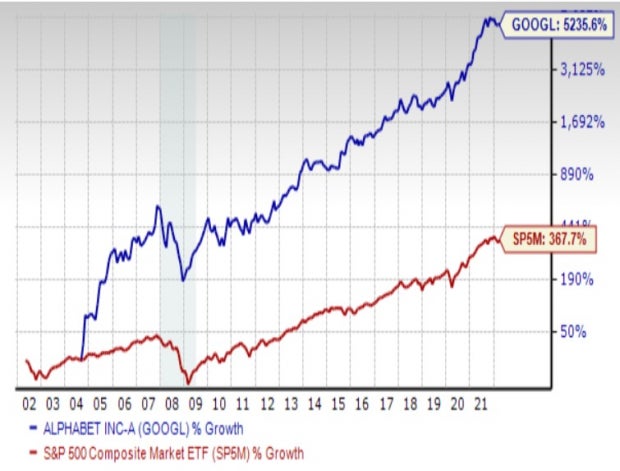 Because of its size, Alphabet continues to generate substantial revenue and profits quarter upon quarter and year upon year. And while there may be temporary setbacks at any given time because of business cycles, recessions and so forth, the company has demonstrated its ability to bounce back. This makes it a solid long-term bet.