PerkinElmer, Inc. (PKI - Free Report) recently announced the expansion of its in vivo imaging portfolio with the introduction of the Vega imaging system. This system is a first-of-its-kind ultrasound platform that integrates hands-free, automated technology with a high-throughput ability to advance non-invasive research and drug development studies of cancer, liver and kidney disease, cardiology and more.

PerkinElmer is one of the leading providers of preclinical imaging systems comprising multiple modalities throughout ultrasound, optical and microCT, including the widely adopted IVIS optical imaging platform.

PerkinElmer got the Vega technology, which was commercialized in 2018, via the buyout of SonoVol, Inc. – a spinout from the Joint Department of Biomedical Engineering at the University of North Carolina at Chapel Hill and North Carolina State University.

This announcement is likely to boost PerkinElmer’s already robust and broad product portfolio.

Benefits of the Vega Imaging System

This system’s high-throughput ability enables researchers to consecutively scan up to three subjects in a few minutes. Apart from this, widefield imaging allows researchers to visualize pathophysiology of disease or the effects of therapies within the broader anatomical and pathological context. 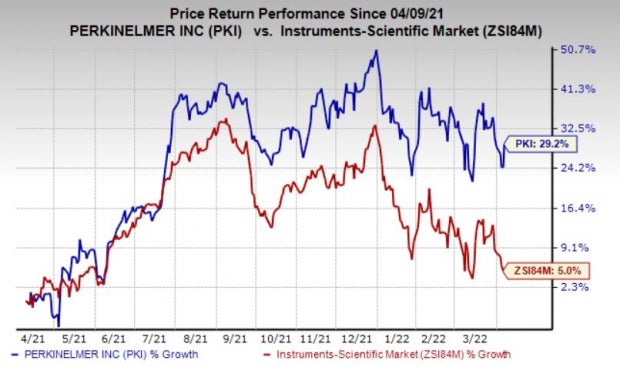 By removing challenges related to conventional hand-held ultrasound systems, the innovative design in this system leads to easy-to-use technology that can be operated in the absence of a dedicated sonographer, while delivering more consistent results compared to traditional ultrasound systems.

Per management at PerkinElmer, the innovative Vega ultrasound system can help researchers with research and development (R&D) productivity with rapid image acquisition, thereby supporting a range of ultrasound studies while meeting the growing demand for non-invasive animal imaging technologies.

Per a report by MarketsandMarkets, the global preclinical imaging market is projected to witness a CAGR of 6.2% from 2016 to 2021 to reach $910.4 million by 2021. Hence, this announcement comes at an opportune time.

Shares of the Zacks Rank #3 (Hold) company have gained 29.2% in a year’s time compared with the industry’s rally of 5%.

AMN Healthcare has an estimated long-term growth rate of 16.2%. AMN’s earnings surpassed estimates in each of the trailing four quarters, the average surprise being 20%. It currently sports a Zacks Rank #1 (Strong Buy). You can see the complete list of today’s Zacks #1 Rank stocks here.

AMN Healthcare has gained 36.5% against the industry’s decline of 55.8% over the past year.

Edwards Lifesciences, carrying a Zacks Rank #2 (Buy), has an estimated long-term growth rate of 13.9%. EW’s earnings surpassed estimates in three of the trailing four quarters and missed once, the average surprise being 6.5%.

Edwards Lifesciences has appreciated 43.9% against the industry’s 0.8% fall over the past year.

Henry Schein has an estimated long-term growth rate of 11.8%. HSIC’s earnings surpassed estimates in each of the trailing four quarters, the average surprise being 25.5%. It currently has a Zacks Rank #2.

Henry Schein has surged 29% compared with the industry’s rally of 7.6% over the past year.