TG Therapeutics, Inc. (TGTX - Free Report) has voluntarily decided to withdraw its pending biologics license application (BLA)/supplemental new drug application (sNDA) seeking approval for the combination of its approved drug, Ukoniq, and pipeline candidate, ublituximab. The combination regimen is referred to as U2.

The BLA/sNDA sought approval for U2 as a potential treatment for chronic lymphocytic leukemia (CLL) and small lymphocytic lymphoma (SLL) in adult patients. The company completed the rolling submission of the BLA/sNDA in 2021 based on data from a successfully completed phase III study — UNITY-CLL — evaluating the U2 combination regimen. The BLA/sNDA was accepted by the FDA last year and the PDUFA goal date was set to Mar 25, 2022.

Apart from the pending BLA/sNDA for U2, TG Therapeutics also withdrew the sale of Ukoniq in its approved indications — marginal zone lymphoma (MZL) and follicular lymphoma (FL). The drug was granted accelerated approval in 2021 to treat adult patients with MZL or FL. The company anticipates the voluntary withdrawal of Ukoniq from the sale to result in the withdrawal of the accelerated approval for the product.

Ukoniq was the only marketed drug in TG Therapeutics’ portfolio. A potential approval to U2 should have boosted sales going forward. The voluntary withdrawal of both the approved product and a pending regulatory application are major setbacks for the company. 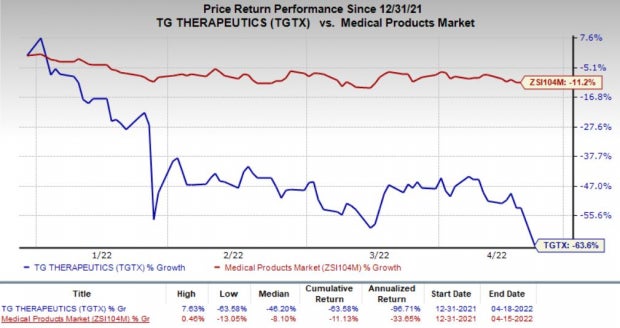 The UNITY-CLL study was conducted under a special protocol assessment agreement with the FDA with the primary endpoint of progression-free survival (“PFS”). Data from the study showed that U2 prolonged PFS compared to the control arm of the study. However, the FDA raised concerns related to overall survival (“OS”), which was the study’s secondary endpoint but not part of the primary analysis in accordance with the special protocol assessment agreement. The FDA requested an early analysis of OS as part of the review process of the BLA/sNDA for U2. TG Therapeutics’ first analysis as well as updated analysis of the OS demonstrated an increasing imbalance in favor of the control arm.

The imbalance in the OS data led TG Therapeutics to withdraw the pending BLA/sNDA for U2 to treat CLL/SLL.

TG Therapeutics faced a couple of regulatory setbacks with its approved drug as well as the pending BLA/sNDA for U2 in the past few months.

In November 2021, the FDA notified TG Therapeutics that it would hold a meeting of the Oncologic Drugs Advisory Committee (ODAC) to discuss the pending BLA/sNDA for U2, which was planned for March or April 2022. An advisory meeting was not planned initially and the FDA’s decision to hold an ODAC was based on concerns following an early ad-hoc analysis of OS from the UNITY-CLL study

In January 2022, the FDA placed select studies of U2 and its components for CLL and another targeted indication, non-Hodgkin’s lymphoma, under partial clinical hold. The ODAC and partial hold was based on the FDA’s concerns related to a possible increased risk of death with Ukoniq. In February, the FDA issued a drug safety communication announcing an investigation of Ukoniq’s risk of death. The regulatory authority also encouraged healthcare providers to review patients’ progress on Ukoniq and share the risks and benefits of continuing treatment with Ukoniq compared to other available treatments.

Currently, TG Therapeutics has one BLA under review with the FDA seeking approval for ublituximab as a potential treatment for relapsing forms of multiple sclerosis. A decision is expected in September 2022.

Earnings of Axcella Health surpassed estimates in three of the trailing four quarters and missed once, the average beat being 1.67%.

Earnings of Trevi surpassed estimates in two of the trailing four quarters and missed the same on the other two occasions, the average beat being 5.09%.

NVR Gears Up to Report Q1 Earnings: What's in the Offing?