Shares of Jazz Pharmaceuticals (JAZZ - Free Report) have gained 29.9% so far this year, primarily driven by strong sales of its newly launched and acquired products. The Zacks Medical - Drugs industry has declined 16.7% in the same period. 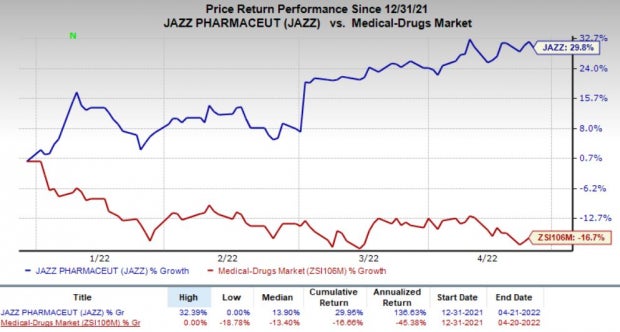 During the fourth quarter of 2021, the company’s revenues grew 35% year over year to $897.0 million, majorly driven by its new sleep disorder drug, Xywav, and new oncology drugs — Zepzelca and Rylaze. Jazz acquired British cannabinoid drug company, GW Pharmaceuticals in 2021, adding Epidiolex and Sativex to its portfolio. Sales of Epidiolex added $193.8 million to Jazz’s top line during the fourth quarter, reflecting pro-forma growth of 35% year over year.

Robust sales of Jazz’s key drugs also led to better-than-expected results during the fourth quarter of 2021. The company expects its revenues to grow by 11.9% to 18.4% in 2022 to $3.46-$3.66 billion. It also expects its new and acquired drugs to generate at least 65% of net product sales, suggesting reduced dependency on older drugs, including its major contributor, Xyrem, which is set to face generic competition in the second half of 2022.

Xywav is a low-sodium formulation and a Xyrem follow-on product to treat EDS or cataplexy in narcolepsy patients. Xywav recorded sales of $182.7 million in the quarter compared with $153.1 million in the previous quarter. Moreover, patients have been switching from Xyrem since its launch in 2020. This is helping Jazz to reduce its dependency on Xyrem. Sales of this drug are likely to reduce significantly next year as generics are likely to enter the market. Xyrem generated more than 32% of revenues during the fourth quarter and 41% for the full year.

Jazz expects an authorized generic version of Xyrem to be launched by Hikima Pharmaceuticals in the second half of 2022. We expect the strong growth in Xywav sales to offset the majority of the loss in Xyrem sales. The label expansion of Xywav in the IH indication will boost its sales further. Moreover, Xywav will also extend the exclusivity for Jazz’s sleep disorder portfolio. However, the impact of Xyrem’s generic on Xywav sales remains to be seen.

Most of Jazz’s oncology drugs have also performed well during the fourth quarter. The drugs are likely to continue the positive trend in 2022 as Jazz continues to focus on expanding their label and launch in new countries. In March, Jazz initiated a phase II basket study to evaluate its new cancer drug, Zepzelca (lurbinectedin), as monotherapy for treating advanced urothelial carcinoma, large cell neuroendocrine carcinoma of the lung, and homologous recombination deficient (“HRD”) tumors.

Jazz added a pre-clinical oncology candidate WTX-613 to its pipeline earlier this month through a licensing agreement with Werewolf Therapeutics (HOWL - Free Report) . Werewolf's pipeline candidate WTX-613 is an engineered cytokine pro-drug that gets activated specifically within the tumor microenvironment and stimulates particular receptors. Per Jazz management, Werewolf’s WTX-613 has the potential to treat a wide range of cancer types in different stages and also in combination with other cancer therapies, including immune checkpoint inhibitors, targeted therapies and chemotherapy.

Jazz’s focus on driving its revenues for approved drugs as well as the development of its pipeline bodes well for the company and is likely to drive its share price going forward.

Infinity Pharmaceuticals’ earnings surpassed estimates in two of the trailing four quarters and matched the same once while missing on the other occasion.