Apellis Pharmaceuticals, Inc.’s (APLS - Free Report) lead drug, Empaveli (pegcetacoplan), has been approved by the FDA as a monotherapy treatment for adult patients suffering from paroxysmal nocturnal hemoglobinuria (“PNH”). The company has seen a strong initial uptake of Empaveli since its approval in May 2021.

Empaveli is approved for treatment-naïve patients as well as for those switching from Alexion’s [now part of AstraZeneca’s (AZN - Free Report) ] C5 inhibitor therapies for PNH, namely, Soliris and Ultomiris (ravulizumab).

In December 2021, the European Commission approved Aspaveli for the treatment of adult patients with PNH who are anemic after treatment with a C5 inhibitor for at least three months. The drug is marketed under the trade name Empaveli in the United States.

Shares of Apellis have gained 7.6% in the year so far against the industry’s decline of 14.7%. 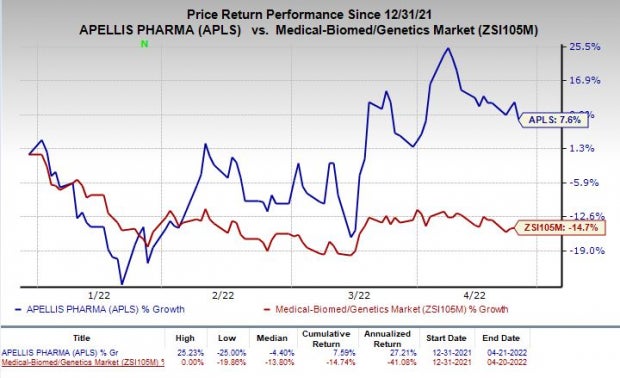 Pegcetacoplan, as a monotherapy, is being evaluated in two phase III studies, namely, DERBY and OAKS, for treating patients with geographic atrophy (“GA”). Apellis is planning to submit a new drug application or NDA to the FDA for intravitreal pegcetacoplan to treat GA in the second quarter of 2022.

The company is looking to submit a marketing authorization application to the European Medicines Agency for pegcetacoplan to treat GA in the second half of 2022.

The phase II MERIDIAN study is evaluating systemic pegcetacoplan for treating amyotrophic lateral sclerosis or ALS. The company plans to complete enrollment in the study in the first half of 2022. A potential label expansion of the drug for any of the above indications will be a boost to the company’s top line.

Though Apellis has made steady progress so far with Empaveli, we are concerned about the lack of other candidates in the company’s pipeline. Due to the lack of a strong pipeline, the company is heavily dependent on Empaveli for growth. Any regulatory or developmental setback for the drug will hurt the stock. Stiff competition in the target market also remains a headwind.

Earnings of Vertex surpassed estimates in each of the trailing four quarters.

Earnings of Voyager Therapeutics have surpassed estimates in three of the trailing four quarters and missed the same on the other occasion.

What's in Store for American Electric (AEP) in Q1 Earnings?