Last week, the European Automobile Manufacturers Association (“ACEA”) released data for passenger car registrations for March 2022. The European Union (EU) passenger vehicle market contracted 20.5% in March to 844,187 units amid chip woes aggravated by the Russia-Ukraine war. Most of the countries in the EU witnessed a double-digit drop in registrations, including four key markets. Registrations in Italy, Germany, Spain and France witnessed a yearly decline of 29.7%, 17.5%, 30.2% and 19.5%, respectively. During the first quarter of 2022, new car registrations contracted 12.3% from the prior-year period to 2,245,976 units. All four major EU markets saw double-digit declines: Italy (-24.4%), France (-17.3%), Spain (-11.6%) and Germany (-4.6%).

1. Tesla reported first-quarter 2022 earnings of $3.22 a share, growing significantly from the year-ago figure of 93 cents and surpassing the Zacks Consensus Estimate of $2.15. This marked the fifth straight earnings beat for the company. Higher-than-expected deliveries and automotive gross profit resulted in this outperformance. Total first-quarter 2022 deliveries of 310,048 units topped the Zacks Consensus Estimate of 298,495. Automotive gross profit came in at $5,539 million, which outpaced the consensus mark of $4,113 million.

2. Genuine Parts reported first-quarter 2022 adjusted earnings of $1.86 per share, up 24% year over year. The bottom line also surpassed the Zacks Consensus Estimate of $1.70 per share. Higher-than-expected sales and operating profits across both its segments resulted in this outperformance. The company reported net sales of $5,294.6 million, surpassing the Zacks Consensus Estimate of $5,131 million. The top line is also higher than the year-ago quarter’s $4,465 million. The upside resulted from 12.3% growth in comparable sales and 8.1% benefit from acquisitions, partly offset by an unfavorable impact of foreign currency translation.

3. Lithia reported first-quarter 2022 adjusted earnings of $11.96 per share, marking a whopping 103% increase from the prior-year quarter’s $5.89. The bottom line also beat the Zacks Consensus Estimate of $9.63 per share. Higher-than-expected revenues from new vehicle, used-vehicle (retail and wholesale) and fleet and others segments led to the upside. Total revenues jumped 54% year over year to $6,705.3 million. The top line also exceeded the Zacks Consensus Estimate of $6,031.8 million.

4. AutoNation reported first-quarter 2022 adjusted earnings of $5.78 per share, which skyrocketed 103% year over year and topped the Zacks Consensus Estimate of $5.39. This outperformance can be primarily attributed to higher-than-expected used vehicle sales. For the reported quarter, revenues amounted to $6,752.8 million, up 14.4% year over year. The top line also outpaced the Zacks Consensus Estimate of $6,628.1 million.

AutoNation’s cash and cash equivalents were $608.1 million as of Mar 31, 2022, reflecting a sharp rise from $350 million in the year-ago period. The company’s liquidity was $2.4 billion, including $608 million in cash and nearly $1.8 billion availability under the revolving credit facility. The firm’s inventory was valued at $1,698.3 million. At first quarter-end, non-vehicle debt was $3,548.3 million. Capital expenditure for the quarter amounted to $50.8 million. During the reported quarter, AutoNation repurchased 3.5 million shares of common stock for an aggregate purchase price of $381 million. On Apr 19, it had around $376 million remaining for share buyback under the current authorization.

5. Carvana incurred a loss of $2.89 per share for first-quarter 2022, wider than the Zacks Consensus Estimate of a loss of $1.72 and the year-ago loss of 46 cents. First-quarter revenues of $3,497 million outpaced the Zacks Consensus Estimate of $3,400.3 million and surged 56% year over year. During the reported quarter, the number of used vehicles sold to retail customers grew 14% from the prior-year period to 105,185. Total gross profit amounted to $298 million, decreasing 12% year over year. SG&A expenses were $727 million, flaring up 45.4% from the prior-year quarter. 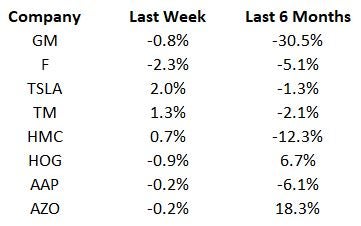 Industry watchers will keep a tab on March 2022 commercial vehicle registrations to be released by the ACEA this week. Investors are also awaiting the quarterly releases of a host of auto biggies that are slated to report this week. Meanwhile, stay tuned for any update on how automakers will tackle the semiconductor shortage and make changes in business operations.

Domino's (DPZ) to Report Q1 Earnings: What's in the Offing?