The biotech sector has been in focus in the past week with some important pipeline and regulatory updates.

Regulatory Update From Gilead:  Gilead Sciences, Inc. (GILD - Free Report) announced that the FDA has approved a label expansion of COVID-19 drug Veklury (remdesivir). The supplemental new drug application (sNDA) seeking approval of Veklury for the treatment of pediatric patients has been approved. The regulatory body approved the treatment for patients who are older than 28 days, weighing at least 3 kg, and are either hospitalized with COVID-19 or have mild-to-moderate COVID-19 and are considered high risk for progression to severe COVID-19, including hospitalization or death. Gilead earlier received an approval for Veklury for the treatment of non-hospitalized adult and adolescent patients who are at high risk of progression to severe COVID-19.

Biogen’s AD Drug Update:  Biogen (BIIB - Free Report) has decided to withdraw its Marketing Authorization Application (MAA) for Alzheimer’s disease drug aducanumab. The company has informed the European Medicines Agency (“EMA”) of the same. The decision to withdraw follows interactions with EMA’s Committee for Medicinal Products for Human Use (“CHMP”), indicating that the data provided so far would not be sufficient to support a positive opinion on the marketing authorization of aducanumab by EMA. Biogen’s MAA had been under review by the CHMP in response to the company’s request to re-examine the negative opinion the regulatory body issued in December 2021. The drug is approved in the United States under the brand name Aduhelm.

Axsome Down on Regulatory Update: Shares of Axsome Therapeutics, Inc. (AXSM - Free Report) were down after the company came out with a negative update on AXS-07 for the treatment of migraine. The FDA has informed Axsome that chemistry, manufacturing and controls (CMC) issues identified during its review of the company’s new drug application (NDA) for AXS-07 for the acute treatment of migraine are unresolved. Consequently, based on the time remaining in the NDA review cycle, Axsome expects to receive a Complete Response Letter with respect to this NDA on or about the target action date of Apr 30, 2022. Last week, Axsome announced that it has received and agreed to Postmarketing Requirements/Commitments proposed by the FDA with respect to the NDA for its investigational candidate AXS-05 and shares surged on the same.

Protagonist Down on Study Update: Shares of Protagonist Therapeutics (PTGX - Free Report) declined after the company announced top-line results from the phase II IDEAL study evaluating PN-943 in patients with moderate-to-severe ulcerative colitis (UC). IDEAL is a randomized, double-blinded, placebo-controlled, multicenter phase II study to evaluate the safety and efficacy of PN-943, an oral, gut-restricted, alpha-4-beta-7-integrin antagonist. For 12 weeks, 159 patients with moderate-to-severe active UC were randomized to either twice daily (BID) with 450 mg or 150 mg PN-943, or placebo, and analyzed for outcome measures. While the 450 mg BID dose did not meet the prespecified primary endpoint,  PN-943 achieved 27.5% clinical remission with a delta of 13% versus placebo, with strong concordance across all key proxies, including histological and endoscopic endpoints for efficacy, in the twice daily 150 mg dose arm.  Hence, the company is planning for a registrational phase III study anchored around twice daily 150 mg dose of PN-943, pending regulatory guidance. 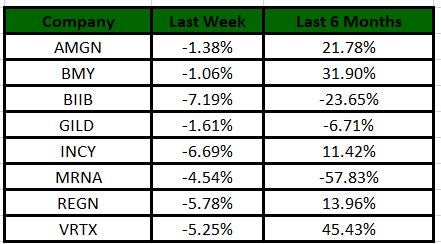 The Nasdaq Biotechnology Index has lost 6.47% in the past five trading sessions. Among the biotech giants, Biogen has lost 7.19% during the period. Over the past six months, shares of Moderna have lost 57.83%. (See the last biotech stock roundup here: Biotech Stock Roundup: NKTR Plunges on Deal Termination, REGN Offers Update & More)

Stay tuned for more pipeline and regulatory updates along with earnings updates.