Net sales in the reported quarter increased 12.6% on a reported basis and 8.6% on a CER basis to $10.86 billion (€9.67 billion) on higher sales of Sanofi’s blockbuster eczema medicine, Dupixent. The Consumer business continued its growth momentum in the quarter. Sales beat the Zacks Consensus Estimate of $10.33 billion.

Sales rose 12.1% at CER in the United States and 7% in the Rest of the World (including China, Japan, Brazil and Russia). In Europe, sales increased 6.7%.

Shares of Sanofi have gained 8.4% in the year so far compared with the industry’s increase of 3.8%. 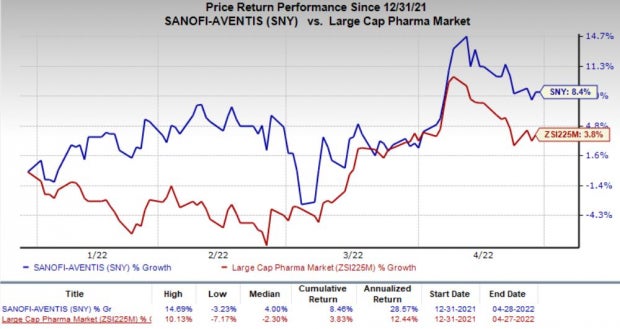 Pharmaceuticals sales rose 7.5% in the quarter to €7.33 billion, driven by the continued strong performance of Dupixent.

In the immunology and neurology franchise, Dupixent generated sales of €1.61 billion in the quarter, up 45.7% year over year. Sales of the drug in the United States rose 38.1%, driven by continued growth in atopic dermatitis and rapid uptake in asthma and chronic rhinosinusitis with nasal polyposis indications. Sales rose 53.3% in Europe and 88% in Rest of the world as the company expanded in newer markets and younger age groups.

Aubagio sales declined 6.6% to €491 million, hurt by lower sales in the U.S. market due to competitive launches and pricing pressure. Kevzara recorded sales of €95 million in the quarter, up 61.4%, driven by higher demand for IL-6 receptor blockers and a temporary shortage of tocilizumab. Sanofi markets Dupixent and Kevzara in partnership with Regeneron (REGN - Free Report) . While sales are recorded by Sanofi, Regeneron records its share of profits/losses in connection with global sales of Dupixent and Kevzara.

Oncology sales increased 6.8% to €244 million, driven by the launch of Sarclisa, which more than offset the decline in sales of Jevtana. Libtayo sales were up 53.8% at €41 million while Sarclisa sales gained 85.3% to €65 million. Sanofi has a collaboration agreement with Regeneron for Libtayo. Regeneron records net product sales of Libtayo in the United States, and Sanofi records net product sales of the drug outside the country. Jevtana’s sales declined 25.4% to €98 million due to the entry of generic competition in Europe last year.

Sales in General Medicines GBU declined 0.7% to €3.76 billion, as the growth of core drugs (like Multaq, Toujeo, Praluent and Rezurock) was more than offset by lower sales of Lovenox.

Vaccines GBU sales gained 6.8% to €1.02 billion in the quarter, mainly due to strong demand for Polio/Pertussis/Hib vaccines and partial recovery in demand for travel vaccines.

The Consumer Healthcare (CHC) stand-alone unit generated sales of €1.33 billion, up 17%, driven by the strong performance of the Cough and Cold, Digestive Wellness and Pain Care categories.

Selling, general and administrative expenses increased 4.3% at CER in the quarter, reflecting increased investments in Specialty Care, which offset the benefit from cost savings. Research and development expenses increased 14% at CER as higher investments behind priority assets along with costs related to the recent acquisitions to boost the pipeline.

Sanofi expects adjusted earnings to grow in a low double-digit range at CER in 2022. It anticipates a positive currency impact in the range of 4%-5% on earnings, at average of exchange rates in April.

Earnings of Trevi surpassed estimates in two of the trailing four quarters and missed twice, the average beat being 5.09%.