Overall, earnings season is turning out to be pretty much as expected. Most members of the S&P 500, which is like a benchmark for the broader market, are still beating estimates, but the beat ratios are coming down and are not as broad-based, especially when you X out the highflying energy sector.

Management commentary reflects continued input cost inflation, although most of this is still attributed to supply chain issues rather than the Russia-Ukraine war. That is not surprising given that the segments mostly affected by the war are energy, minerals and grain. And of course, there’s much more to the market than that, although energy does tend to affect everything else.

It does look like supply chain issues will continue through all of 2022, as the demand-supply mismatch is real and the Fed’s measures to reign in demand don’t have an immediate effect. For most companies, this continues to mean escalation in input costs.

Labor markets also remain tight, and while the latest numbers (for March) aren’t released yet, it’s clear that wage inflation continued through February. For companies, this is another reason for the higher cost of operation.

Some of the rising cost has been passed on to the consumer, but the margin pressure is evident across the board and indicates that companies are only passing on what the traffic will bear.

A healthy consumer is not at all a bad thing, because ultimately that’s what it all boils down to: the consumer has to be able to deal with the effects of Fed actions if we are to avoid a recession.

For today’s picks, I’ve zeroed in on buy-ranked stocks that have topped estimates this week. But I’ve focused on those with Value Scores of A or B, the reason being that the shares of a company tend to pop after it beats earnings estimates and there’s always the concern that there may not be further upside in the cards. Buying below intrinsic value adds another layer of safety if you will. And we could all do with some safety given all the uncertainty out there.

First on the list is Pilgrim's Pride Corporation (PPC - Free Report) , which is involved in the production, processing, marketing and distribution of fresh, frozen and value-added (various cuts, frozen, prepared) chicken and pork products to retailers, distributors, and foodservice operators in the U.S., UK, Mexico, the Middle East, Asia and Continental Europe.

Pilgrim's Pride’s earnings came in 81.5% ahead of estimates, despite significant pressures from higher input and labor costs, as well as negative mix. Revenues increased over 29% from last year. U.S. foodservice volumes exceeded pre-pandemic levels even as retail volumes remained stable. Volumes and costs were both unfavorable in Europe but collaborations with key customers could turn things around for PPC. Mexico demand remains strong amid continued operational challenges.

The Zacks Rank #1 (Strong Buy) stock with Value and Growth Scores of B belongs to the Food - Meat Products industry, which is in the top 18% of Zacks-classified industries. A buy-ranked stock in a top-ranked industry (the higher the rank the better) generally has a strong chance of upside, according to Zacks historical data.

And Pilgrim's Pride is also seeing positive estimate revisions. Both 2022 and 2023 estimates are up 5 cents in the last 30 days. The positive print indicates that further revisions may be in the cards.

Its earnings are expected to increase around 22% this year.

As manufacturer and marketer of transportation fuels and petrochemical products in the U.S., Canada, UK and Ireland, Valero Energy Corp. (VLO - Free Report) is poised to benefit from the current energy crisis. As of December 31, 2021, the company owned 15 petroleum refineries with a combined throughput capacity of approximately 3.2 million barrels per day; and 12 ethanol plants with a combined ethanol production capacity of approximately 1.6 billion gallons per year.

The company is a beneficiary of a couple of factors affecting the industry in which it operates. The first is the sanctions on Russia that is limiting global oil supply even as demand is approaching pre-pandemic levels. The second is the tightness in U.S. refining capacity, as demand continues to rise in an industry that has been closing down facilities. This is resulting in strong prices and margins at the company.

The Zacks Rank #2 (Buy) stock has Value and Growth Scores of A. It belongs to the Oil and Gas - Refining and Marketing industry (top 11%).

Next up is Dorman Products, Inc. (DORM - Free Report) , a global supplier of replacement parts and fasteners for passenger cars, light trucks and medium- and heavy-duty trucks.

The company is benefiting from favorable dynamics in the industry and across customer channels, as well as improved new product penetration that are boosting revenues. In addition, price hikes are helping offset logistics, wage and commodity inflation.

The Zacks Rank #2 stock has Value and Growth Scores of B. It belongs in the Zacks-classified Automotive - Replacement Parts industry (top 24%).

The Zacks Consensus Estimate for 2022 is up a couple of cents in the last 7 days while the 2023 estimate is up a penny.

Arch Resources, Inc. (ARCH - Free Report) produces and sells thermal and metallurgical coal from surface and underground mines. Coal is considered one of the dirtiest fuels and its use in the thermal segment has been going down in the last few years.

As a result, Arch Resources has been refocusing the business toward the steel/metallurgical segment. The current energy crisis and inventory position is however leading to very strong demand from the thermal segment, which has been positive for its recent results. The company is also returning cash to investors through handsome dividends.

The Zacks Rank #1 stock has a Value Score of B and Growth Score of C. It is part of the Coal industry (top 1%).

The final stock on this list is Range Resources Corp. (RRC - Free Report) , which is engaged in the exploration, development and acquisition of natural gas and oil properties. As of December 31, 2021, it owned and operated 1,350 net producing wells and operated around 794,000 net acres under lease in the Appalachian region of northeastern U.S. Its natural gas and natural gas liquids (NGLs) are sold to utilities, marketing and midstream companies, and industrial users; petrochemical end users, marketers/traders, and natural gas processors. Its oil and condensate is sold to crude oil processors, transporters and refining and marketing companies.

Like the other energy companies discussed above, Range Resources also benefits from the current energy crisis and resultant escalation in price of natural gas and NGLs. Additionally, the company’s properties in the Appalachian make for very efficient extraction, which will remain an important factor in containing cost. The recent strength in prices has allowed the company to reduce its debt and return cash to shareholders despite maintaining a decent level of capex.

Range Resources carry a Zacks Rank #2, Value Score B and Growth Score A. The Oil and Gas - Exploration and Production - United States industry, to which it belongs is in the top 2% of Zack-classified industries.

In the last 7 days, its 2022 estimate has jumped 73 cents while the 2023 estimate jumped $1.27. And these increases come on top of earlier increases. In other words, estimates for this company have been increasing steadily over the last 90 days. 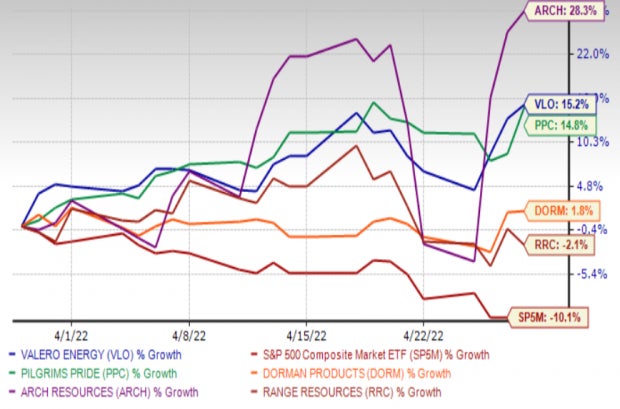