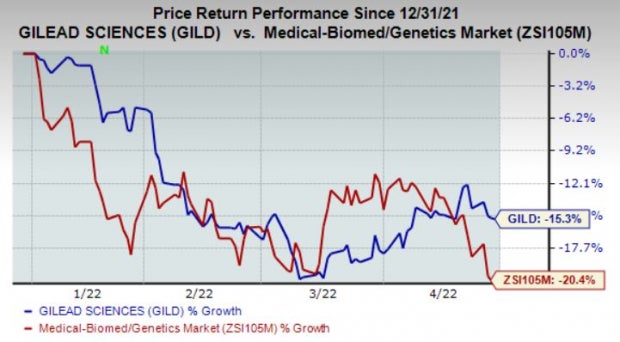 The company reported earnings of $2.12 per share in the quarter, which beat the Zacks Consensus Estimate of $1.77 and jumped from $2.04 in the year-ago quarter. The year-over-year increase was due to higher product sales.

Total revenues of $6.6 billion surpassed the Zacks Consensus Estimate of $6.2 billion and increased 3% from the year-ago quarter due to higher demand for Biktarvy [bictegravir 50mg/emtricitabine 200mg (FTC)/tenofovir alafenamide 25mg (TAF)] and Veklury. The increase was partially offset by the impact of the loss of exclusivity for Truvada [FTC/tenofovir disoproxil fumarate 300mg (TDF)] in the United States and unfavorable pricing dynamics for hepatitis C virus (HCV) products.

Truvada sales decreased 72% year over year due to the loss of exclusivity in the United States in late 2020.

Veklury sales increased 5% to $1.5 billion due to higher demand.

Product sales are projected to be $23.8–$24.3 billion. Total product sales, excluding Veklury, are expected to be $21.8–$22.3 billion. Total Veklury sales are estimated at around $2 billion. Earnings per share are expected in the range of $6.20-$6.70. The Zacks Consensus Estimate for sales and earnings per share is pegged at $24.52 billion and $6.54, respectively.

The company recently received a complete response letter from the FDA related to vial compatibility issues for the new drug application of investigational lenacapavir for the treatment of HIV-1 infection in heavily treatment-experienced (HTE) people with multi-drug resistant HIV-1 infection.

The company announced results from the phase III TROPiCS-02 study of Trodelvy in patients with HR+/HER2- metastatic breast cancer who had been heavily pre-treated. The study met its primary endpoint, demonstrating a statistically significant improvement in progression-free survival compared to physician’s choice of chemotherapy.  The company received FDA approval for Yescarta for the treatment of adult patients with LBCL that is refractory to first-line chemoimmunotherapy or that relapse within 12 months of first-line chemoimmunotherapy.

The FDA has lifted the partial clinical hold on studies evaluating investigational magrolimab in combination with azacitidine for the treatment of myelodyspastic syndrome and acute myeloid leukemia.

Gilead’s first-quarter results were better-than-expected due to an incremental contribution from Veklury sales. In addition, Biktarvy sales maintained momentum.

Gilead is making efforts to develop its oncology business to diversify its revenue base as competition is stiff in the HIV business from the likes of GlaxoSmithKline (GSK - Free Report) .

Loss estimates for VYGR have narrowed to $1.35 from $2.20 for 2022 in the past 90 days. Earnings of Voyager surpassed estimates in three of the trailing four quarters and missed the same once, the average surprise being 41%.

What's in the Cards for AGNC Investment's (AGNC) Q1 Earnings?