Bristol-Myers Squibb Company (BMY - Free Report) reported first-quarter 2022 earnings of $1.96 per share, which beat the Zacks Consensus Estimate of $1.92 and increased from $1.74 reported in the year-ago quarter.

However, shares are down in pre-market trading due to the cut in guidance.  A faster-than-expected erosion of Revlimid in International markets also forced the management to slash guidance for the drug.

Shares of the company have gained 19.9% in the year so far against the industry's decline of 20.6%. 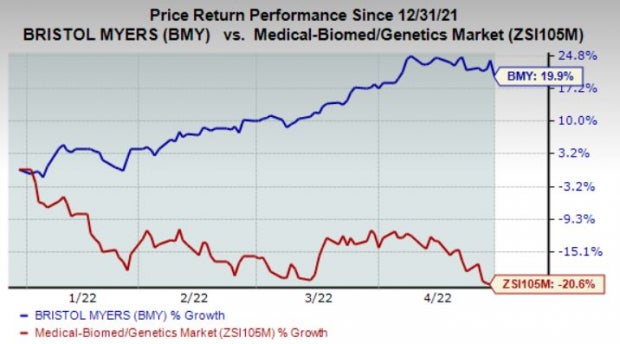 Revenues increased 10% to $7.7 billion in the United States. Revenues were down 3% outside the country. Ex-U.S. revenues were up 3% when adjusted for foreign exchange impact.

Myeloma drug, Revlimid, contributed $2.8 billion to revenues, down 5% in the quarter due to generic competition.

Eliquis maintained momentum for the company as sales increased 11% to $3.2 billion. We note that Bristol-Myers has a collaboration agreement with Pfizer (PFE - Free Report) for Eliquis.

Both the companies collaborated in 2007 for Eliquis. Pfizer funds between 50% and 60% of all development costs depending on the study. Profits and losses are shared equally on a global basis except in certain countries where Pfizer commercializes Eliquis and pays BMY a sales-based fee.

Sales of immuno-oncology drug Opdivo, approved for multiple cancer indications, were up 12% year over year to $1.9 billion. Label expansion of the drug boosted sales driven by higher demand across multiple indications, including the Opdivo+Yervoy-based combinations for non-small cell lung cancer (NSCLC), Opdivo+Cabometyx combination for kidney cancer and Opdivo-based therapies for various gastric and esophageal cancers.

Another MM drug, Pomalyst, generated sales of $826 million, up 7% year over year.

Leukemia drug, Sprycel, raked in sales of $483 million, up 3% year over year.

Abraxane generated sales of $214 million, down 32% year over year.

Adjusted research and development expenses decreased 4% to $2.1 billion in the quarter. Adjusted marketing, selling and administrative expenses increased 10%. Gross margin decreased to 78.1% from 79.2% in the quarter.

The regulatory body approved  Opdualag, a new, first-in-class, fixed-dose combination of nivolumab and relatlimab, a novel LAG-3 inhibitor, for the treatment of adult and pediatric patients 12 years of age or older with unresectable or metastatic melanoma, based on phase II/III RELATIVITY-047 study.

Bristol-Myers’ performance in the first quarter of 2022 was decent as earnings and sales beat estimates. However, the lowering of guidance was disappointing. Revlimid is facing generics soon, which will adversely impact sales.

Nevertheless, the approval of new drugs adds a new stream of revenues, which should boost growth in the coming quarters. The pipeline progress has been impressive and strategic collaborations will further expand the portfolio.

Loss estimates for VYGR have narrowed to $1.35 from $2.20 for 2022 in the past 60 days. Earnings of Voyager surpassed estimates in three of the trailing four quarters and missed the same once, the average surprise being 41%.