However, apart from Hawaiian Holdings, the June-quarter results of which are likely to be hurt by the delay of the full restoration of its Japan network, the likes of LUV expect profitability owing to upbeat air-travel demand.

With the Q1 earnings season underway, a plethora of airline releases was also discussed in the previous week’s write-up.

1.Southwest Airlines, currently carrying a Zacks Rank #3 (Hold), incurred a loss (excluding 15 cents from non-recurring items) of 32 cents in the first quarter of 2022, narrower than the Zacks Consensus Estimate of a loss of 34 cents. However, the amount of loss narrowed 81.4% year over year. LUV’s first-quarter performance was hurt by Omicron-induced woes in January and February.

Anticipating continued improvement in bookings, the carrier expects to reap profits in the remaining three quarters of 2022 as well as for the full year. Management predicts operating revenues to increase 8-12% in the second quarter from the comparable period’s level in 2019. Economic fuel costs per gallon are forecast to be $3.05-$3.15 in the second quarter. Due to increase in labor and airport costs as well as lower productivity levels, LUV expects unit costs, excluding fuel, oil and profit-sharing expenses, and special items, to increase 14-18% in the ongoing quarter from the comparable period’s level in 2019. Interest expenses are expected to be $90 million in the second quarter.

For 2022, Southwest Airlines expects capacity to decline approximately 4% from the 2019 level. Economic fuel costs per gallon are estimated to be $2.75-$2.85. Cost per available seat miles (CASM), excluding fuel, oil and profit-sharing expenses, and special items, are anticipated to increase 12-16% in 2022 from the 2019 level. Interest expenses are expected to be $360 million in 2022. LUV expects to end the year with total aircraft count of 814. Effective tax rate is expected to be 24-26% in the year. Capital spending is still anticipated to be about $5 billion in 2022.

2. JetBlue Airways incurred a first-quarter 2022 loss (excluding 1 cent from non-recurring items) of 80 cents per share, comparing favorably with the Zacks Consensus Estimate of a loss of 85 cents.

3. Hawaiian Holdings’ first-quarter 2022 loss (excluding 15 cents from non-recurring items) of $2.54 per share was wider than the Zacks Consensus Estimate of a loss of $2.51. HA reported a loss of $3.85 in the year-ago quarter. Moreover, quarterly revenues of $477.2 million surged more than 100% year over year but missed the Zacks Consensus Estimate of $482.1 million. Capacity for the June quarter to decline in the band of 11.5-14.5% from second-quarter 2019 actuals owing to the delay of the full restoration of its Japan network. Total revenues are anticipated to plunge 8-12% from second-quarter 2019 levels.

4. United Airlines intends to introduce more flights between the United States and Europe. UAL will augment capacity by 25% this summer from 2019 levels. Following this, UAL will serve more transatlantic destinations than any other U.S. carrier combined. Moreover, it will be the largest airline across the Atlantic for the first time in history. As part of the expansion drive, UAL aims to add nonstop flights to five distinctive leisure destinations, currently unattended by any other North American airline. UAL also aims to launch five nonstop flights to some of Europe's most popular business and tourist destinations.

5. SkyWest reported first-quarter 2022 earnings of 35 cents per share, surpassing the Zacks Consensus Estimate of 3 cents. In the year-ago quarter, SKYW reported earnings of 71 cents. The 50.7% year-over-year decline in earnings was due to the 50.6% rise in total costs. Revenues of $735.2 million outperformed the Zacks Consensus Estimate of $667.3 million. The top line jumped 37.53% year over year, courtesy of a 13% increase in block hours (a measure of aircraft utilization) on completed flights.  COVID-19- related revenue concessions given to SkyWest’s major airline partners in the first quarter of 2021 also resulted in year-over-year top line growth.

Revenues from flying agreements (contributing 96.3% to the top line) surged 38.5% from the year-ago quarter’s figure. Expenses pertaining to salary, wages and benefits increased 36.5% in the quarter. With oil price increasing, aircraft fuel expenses escalated 30.7% year over year. The airline, which carried 53.9% more passengers year over year, reported a 12.6% increase in block hours. Passenger load factor (percentage of seats filled by passengers) increased 20.9 percentage points to 77.6% in the March quarter, owing to the uptick in air-travel demand.

SkyWest exited the first quarter with cash and marketable securities of $856 million, marginally down from $860 million at the end of 2021.  Long-term debt (net of current maturities) was $2.79 billion compared with $2.71 billion at December 2021-end. 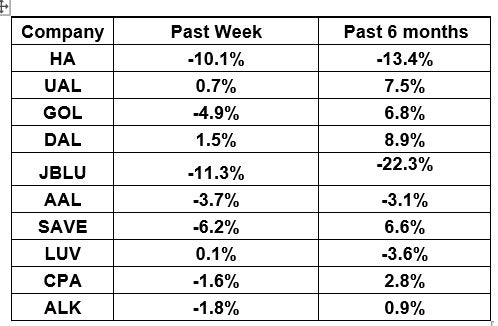 With some more airlines slated to report their first-quarter 2022 financials shortly, investors interested in the industry will keep a close eye on how they perform.

Clorox (CLX) to Report Q3 Earnings: What's in the Cards?