What's in the Cards for Main Street (MAIN) in Q1 Earnings?

Main Street Capital Corporation (MAIN - Free Report) is slated to announce first-quarter 2022 results on May 5, after market close. The company’s earnings and revenues are expected to have increased year over year.

Over the past quarter, shares of the company have lost 5% compared with 0.1% decline of the industry. 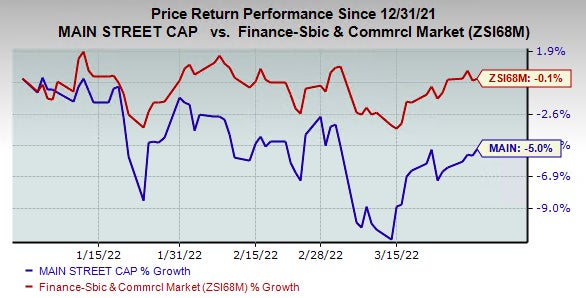 The Zacks Consensus Estimate for Main Street’s earnings of 70 cents for the to-be-reported quarter remained unchanged over the past seven days. Nonetheless, it indicates a rise of 20.7% from the prior quarter’s reported figure.

The Zacks Consensus Estimate of $82.6 million for revenues suggests a 31.5% rise from the prior-year quarter’s reported number.

Earlier in March, for the first time since 2018, the Federal Reserve hiked the interest rates and has signaled a hawkish stance to tame the raging inflation. Despite this aggressive stance, interest rates have remained relatively low. This might have hurt interest income for Main Street during the to-be-reported quarter.

Further, a decline in prepayments and refinancing as mortgage rates increased, might have dampened fee income of the company.

However, Main Street has been witnessing a rise in general and compensation-related expenses for the past several quarters. The trend is expected to continue, which might have hurt the company’s bottom line.

The proven Zacks model does not predict an earnings beat for Main Street this time around. This is because Main Street does not have the right combination of the two key ingredients — a positive Earnings ESP and a Zacks Rank #3 (Hold) or higher — for increasing the odds of an earnings beat.

FIS’ earnings estimates for the to-be-reported quarter have remained unchanged over the 30 days. You can see the complete list of today’s Zacks #1 Rank (Strong Buy) stocks here.

Lending Tree (TREE - Free Report) is slated to announce first-quarter 2022 results on May 5. The company currently carries a Zacks Rank #3.

TREE’s earnings estimates for the to-be-reported quarter have remained unchanged over the 30 days.