Revenues of $6.34 billion increased 24% in Danish kroner and were up 18% at constant exchange rate (“CER”) in the reported quarter. Revenues surpassed the Zacks Consensus Estimate of $5.82 billion. Year over year, sales were driven by higher Diabetes and Obesity care sales as GLP-1 sales increased.

Shares of Novo Nordisk have gained 1.8% so far this year compared with the industry’s rise of 3.3%. 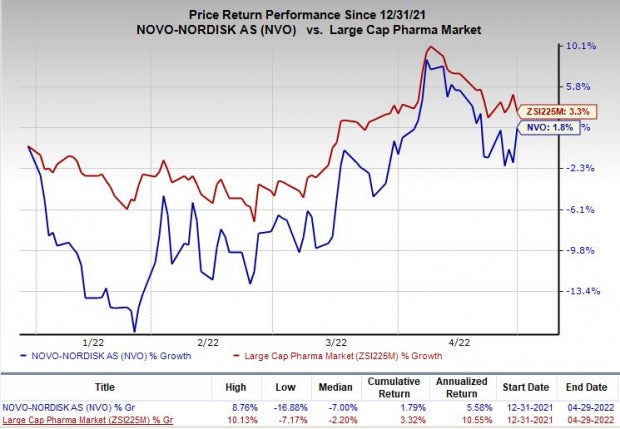 All growth rates mentioned below are on a year-over-year basis.

The Diabetes and Obesity Care segment sales grew 20% at CER. In Diabetes Care, fast-acting insulin, Fiasp’s revenues rose 20% at CER. NovoRapid revenues remained flat at CER, while Human insulin revenues were down 14% at CER. Premix insulin (Ryzodeg and NovoMix) revenues declined 3% at CER. Sales of long-acting insulins (Tresiba, Xultophy and Levemir) decreased 4% at CER. Ozempic had witnessed a strong launch and recorded sales of DKK 12.03 billion for the quarter, up 70% at CER.

Obesity Care (Saxenda and Wegovy) sales were up 107% at CER year over year.

Per the company, the contract manufacturer filling syringes for Wegovy has reinitiated commercial production, and Novo Nordisk expects to make all Wegovy dose strengths available in the United States in the second half of 2022.

In December 2021, Novo Nordisk announced that a contract manufacturer in the United States, which was filling syringes for Wegovy pens, has temporarily stopped deliveries and manufacturing after issues with goods-manufacturing practices.

Sales in the Rare disease segment were up 3% at CER year over year to DKK 5,363 million. Sales of rare blood disorder products were DKK 3,077 million, up 9% at CER. Sales of hemophilia A products increased 10% at CER. Also, Hemophilia B products’ sales rose 18% at CER. Sales of NovoSeven were up 8% at CER to DKK 2,271 million.

Sales and distribution costs climbed 23% in Danish kroner and increased 18% at CER year over year. This increase was due to International Operations and North America Operations reflecting the launch of Rybelsus and promotional activities related to Ozempic.

Research and development costs were up 32% in Danish kroner and increased 29% at CER from the year-ago quarter’s level. Higher costs were driven by clinical activity for late-stage studies.

Administrative costs increased 4% in Danish kroner and were up 2% at CER from the year-ago quarter’s level.

Novo Nordisk now expects 10-14% sales growth at CER, which was previously expected to be 6-10%. The guidance indicates steady sales growth in North America Operations and International Operations, primarily driven by Diabetes and Obesity Care. The guidance also reflects the expectation of meeting the demand for Wegovy in the United States. This apart, the outlook implies intensifying competition in both Diabetes Care and Rare disease units.

Novo Nordisk's revenues and earnings beat estimates in the first quarter of 2022. Ozempic is off to a solid start and the launch of Rybelsus looks encouraging. Saxenda, too, has witnessed strong uptake so far. Also, the approval for Wegovy in the EU for the treatment of obesity in January 2022 is likely to boost sales of the drug in the days ahead.

Earnings of BMRN surpassed estimates in each of the trailing four quarters.

Earnings of VYGR surpassed estimates in three of the trailing four quarters and missed the same on the other occasion.

Earnings of VRTX surpassed estimates in each of the trailing four quarters.

Is a Beat in Store for Zoetis (ZTS) This Earnings Season?