Barring one-time items, adjusted earnings per share came in at 61 cents. The bottom line surpassed the Zacks Consensus Estimate of 36 cents per share.

Payable gold production was 660,604 ounces (806,329 ounces including production from the legacy Kirkland Lake Gold mines) in the reported quarter, up from 516,804 ounces in the prior-year quarter.

Total cash costs per ounce for gold were $811, up from $734 in the year-ago quarter. All-in sustaining costs (AISC) were $1,079 per ounce in the quarter compared with $1,007 per ounce in the prior-year quarter.

Agnico Eagle ended the quarter with cash and cash equivalents of $1,062 million, up471.6% sequentially. Long-term debt was around $1,340.7 million, slightly higher than $1340.2million in the prior quarter.

Total cash from operating activities amounted to $507.4 million in the first quarter, up 38.4% year over year.

The forecast for 2022 capital expenditures is pegged at roughly $1.4 billion.

Shares of Agnico Eagle have declined 13.3% in the past year compared with a 0.9% decline of the industry. 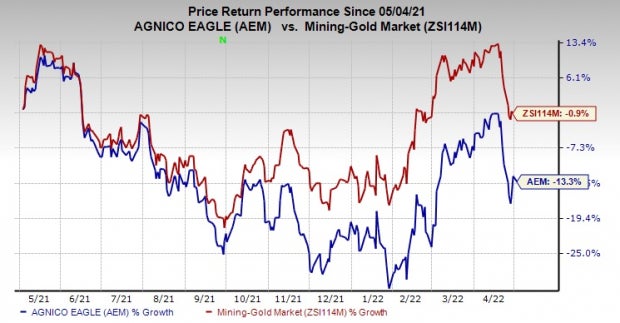 Nutrien has a projected earnings growth rate of 127.9% for the current year. The Zacks Consensus Estimate for NTR's current-year earnings has been revised 31.1% upward in the past 60 days.

Nutrien’s earnings beat the Zacks Consensus Estimate in three of the last four quarters, while missing once. It delivered a trailing four-quarter earnings surprise of roughly 5.9%, on average. NTR has rallied around 70% in a year and currently sports a Zacks Rank #1 (Strong Buy). You can see the complete list of today’s Zacks #1 Rank stocks here.

AdvanSix has a projected earnings growth rate of 54.7% for the current year. The Zacks Consensus Estimate for ASIX’s current-year earnings has been revised 43.6% upward in the past 60 days.

AdvanSix’s earnings beat the Zacks Consensus Estimate in three of the trailing four quarters, the average being 23.6%. ASIX has surged 40.7% in a year. The company carries a Zacks Rank #1.

Allegheny’s earnings beat the Zacks Consensus Estimate in each of the trailing four quarters, the average being 127.2%. ATI has rallied around 15.4% over a year.

What's in the Cards for Hanesbrands' (HBI) Q1 Earnings?