Revenues were $1,350.8 million in the quarter, up around 13% from the year-ago quarter’s levels. The top line surpassed the Zacks Consensus Estimate of $1,275.4.

Revenues were driven by an 8% rise in volumes and an 8% contribution from price. The company benefited from a strong demand environment and price increase actions amid headwinds from raw material, packaging and logistics availability issues as well as higher input and labor costs.

Sales climbed 30% year over year in North America in the quarter, driven by strong volume and price growth in several crops including tree fruits, nuts, vines, corn and soy.

Sales in Latin America rose 31% year over year in the reported quarter on strong volume growth in soybean, corn and sugarcane as well as price increases and a 6% favorable currency impact.

In EMEA, sales rose 11% year over year organically driven by pricing actions across the region and healthy demand for products such as Rynaxypyr active ingredient for corn and top fruit and herbicides for sunflowers. Sales were flat including the currency impact from the weakening of the Turkish lira, the euro and other European currencies.

Revenues went up 2% year over year in Asia, aided by higher prices and strength in Australia and ASEAN countries.

For 2022, FMC continues to expect revenues between $5.25 billion and $5.55 billion, indicating a rise of 7% at the midpoint from 2021 levels. Sales are expected to be driven by higher volumes and prices in all regions.

For second-quarter 2022, revenues are projected in the band of $1.31-$1.39 billion, reflecting an increase of 9% at the midpoint compared with the prior-year quarter’s levels. Adjusted earnings are forecast in the range of $1.70-$2.00 per share, representing an increase of 2% at the midpoint from the prior-year quarter’s levels. It also expects adjusted EBITDA in the range of $330-$370 million for the quarter.

FMC’s shares have increased 10.7% in the past year compared with an 8.3% decline of the industry. 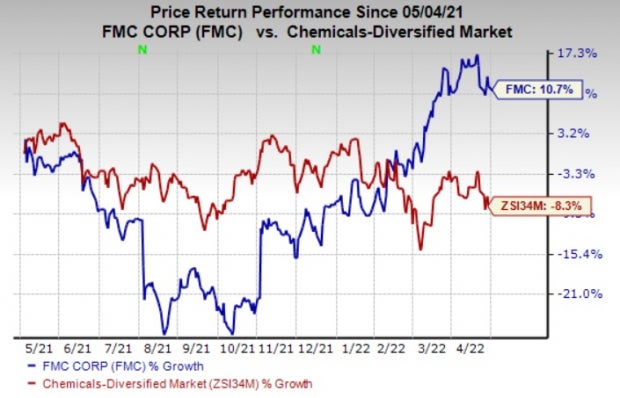 Nutrien, sporting a Zacks Rank #1 (Strong Buy), has an expected earnings growth rate of 127.9% for the current year. The Zacks Consensus Estimate for NTR's current-year earnings has been revised 31.1% upward over the last 60 days. You can see the complete list of today’s Zacks #1 Rank stocks here.

Nutrien beat the Zacks Consensus Estimate for earnings in three of the last four quarters while missed once. It has a trailing four-quarter earnings surprise of roughly 5.9%, on average. NTR has rallied around 70% in a year.

Commercial Metals beat the Zacks Consensus Estimate for earnings in three of the last four quarters while missed once. It has a trailing four-quarter earnings surprise of roughly 16%, on average. CMC has gained around 29% in a year.

AdvanSix, carrying a Zacks Rank #2 (Buy), has an expected earnings growth rate of 54.7% for the current year. ASIX's consensus estimate for current-year earnings has been revised 31.9% upward in the past 60 days.

AdvanSix beat the Zacks Consensus Estimate for earnings in three of the trailing four quarters while missed once. It has a trailing four-quarter earnings surprise of roughly 23.6%, on average. ASIX has rallied around 41% in a year.