FATE's Loss Narrower Than Expected in Q1, Pipeline in Focus

Fate Therapeutics (FATE - Free Report) reported a loss of 68 cents per share in the first quarter of 2022, narrower than the Zacks Consensus Estimate of a loss of 78 cents but wider than the year-ago loss of 49 cents.

The company earned collaboration revenues of $18.4 million in the first quarter, which easily surpassed the Zacks Consensus Estimate of $10 million and were up from $11.1 million reported in the year-ago quarter. Revenues are primarily derived from Fate’s collaborations with Janssen, a unit of Johnson & Johnson (JNJ), and Ono Pharmaceutical.

Cash, cash equivalents and investments at the end of the first quarter were $6417.7 million.

Shares of Fate have declined 47.6% in the year so far compared with the industry’s fall of 21.2%. 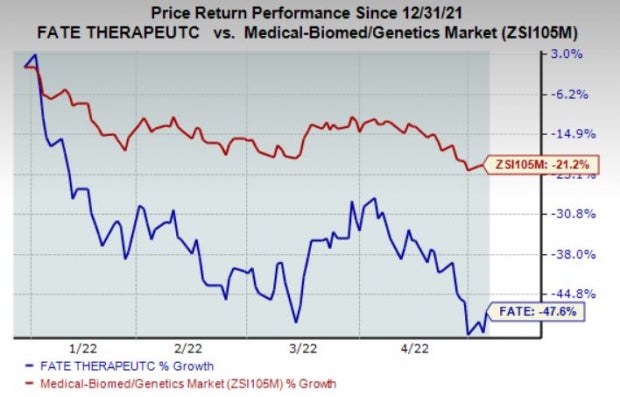 The multi-center phase I study of FT516 in combination with rituximab (FT516+R) for r/r BCL is currently enrolling patients in multiple disease-specific multi-dose, multi-cycle expansion cohorts at 900 million cells per dose, including patients with r/r aggressive lymphomas who have previously been treated with CD19-targeted CAR T-cell therapy.

A phase I study to assess three once-weekly doses of FT538 as monotherapy is currently enrolling patients in the third multi-dose escalation cohort (1 billion cells per dose) for r/r acute myeloid leukemia (AML).

An investigator-initiated study of FT538 in combination with the CD38-targeted monoclonal antibody daratumumab, which is designed to assess the therapeutic potential of targeting CD38+ leukemic blasts, is enrolling patients in the third multi-dose escalation cohort at 1 billion cells per dose.

Loss estimates for VYGR have narrowed to $1.35 from $2.20 for 2022 in the past 60 days. Earnings of Voyager surpassed estimates in three of the trailing four quarters and missed the same once, the average surprise being 41%.