Revenues, primarily from its cardiovascular drug, Vascepa, were down almost 33% year over year to approximately $94.6 million in the quarter, missing the Zacks Consensus Estimate of $127.91 million. Sales were hurt due to rising generic competition in the United States as well as lower net prices in certain countries.

The company continues to avoid revenue guidance for 2022 due to the uncertainty related to the COVID-19 pandemic and generic competition for its sole marketed drug, Vascepa, in the United States.

Shares of Amarin crashed 43.1% on May 4 on lackluster first-quarter results and also most probably on the increasing unfavorable impact of generics on Vascepa sales in the United States. The stock has declined 53.7% so far this year compared with the industry’s 21.2% decrease. 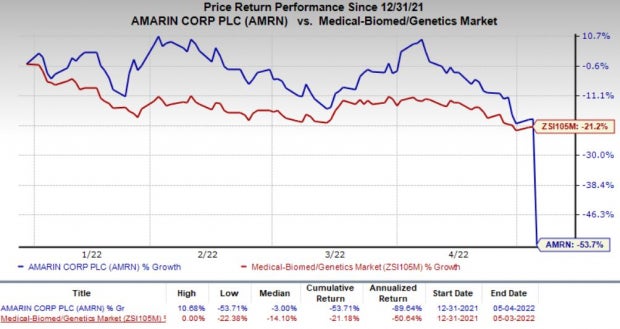 Product revenues, entirely from Vascepa, were $94 million, down approximately 34% year over year due to lower volumes in the United States amid rising generic competition for Vascepa’s reduction of triglyceride levels indication. The company stated that a new generic version entered the U.S. market during the first quarter, taking the total to three generics versions of Vascepa. Moreover, Vascepa sales were also hurt due to ongoing challenges related to COVID-19 disruptions.

Licensing revenues were $0.6 million in the first quarter compared with $0.8 million in the year-ago period. The royalty revenues were primarily from sales of Vascepa recorded by its partners in Canada, the China region and the Middle East. Initial sales of the drug in Germany were unfavorably impacted during the first quarter due to a significant surge in COVID-19 cases in the country.

In October 2021, Amarin initiated a new Go-To-Market strategy in the United States that focuses on enhancing awareness and expanding the company’s reach to healthcare providers, increasing managed care access for Vascepa, and prioritizing cardiovascular risk reduction indication. The company continues to progress with its strategy and focuses on stabilizing Vascepa revenues. It also expanded coverage for Vascepa to approximately 45% of total commercial and Medicare Part D lives.

Amarin launched Vazkepa (U.S. tradename Vascepa) in Germany in September last year. The company received reimbursement decisions in up to eight European countries and plans to launch the drug in six of them in 2022.

Apart from Europe, Amarin is also focusing on expanding in other international countries. The company’s partners are expected to gain approval for Vascepa and launch it in up to six new countries this year.

Alkermes delivered an earnings surprise of 350.48%, on average, in the last four quarters.

Deciphera delivered a negative earnings surprise of 2.73%, on average, in the last four quarters.

BeiGene delivered an earnings surprise of 14.63%, on average, in the last four quarters.