ITT Inc.’s (ITT - Free Report) first-quarter 2022 earnings came in line with the Zacks Consensus Estimate of 97 cents while sales beat the same by 4.1%.

ITT’s adjusted earnings in the reported quarter were 97 cents per share, matching the consensus mark. The bottom line declined 8. 5% from the year-ago figure of $1.06. Inflation in raw material and overhead costs had adverse impacts. 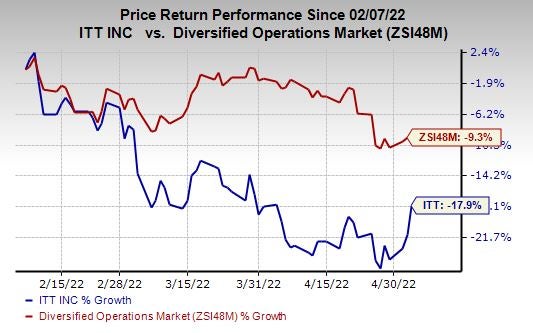 In the quarter under review, ITT’s net sales were $726.2 million, reflecting a year-over-year increase of 4%. The upside was primarily attributable to a 6.8% increase in organic sales. In the reported quarter, total orders were $812.1 million, increasing 11% year over year. The metric increased 14% on an organic basis.

The segmental information is briefly discussed below:

Revenues from Industrial Process totaled $202.2 million, almost flat with $202.3 million reported in the previous year’s quarter. This was primarily attributable to a 2% increase in organic sales. Supply-chain challenges adversely impacted ITT’s energy and chemical business in the quarter. Orders increased 23% year over year on an organic basis.

Revenues from Motion Technologies totaled $370.1 million, reflecting year-over-year growth of 0.3%. The results grew from a 4% increase in organic sales. Supply-chain constraints affected the operations of the automotive OEM businesses. Orders grew 3% from the year-ago quarter’s level on an organic basis.

Revenues from Connect and Control Technologies totaled $154.6 million, up 21.4% year over year and up 23%, organically. Results benefited from strength in the industrial, defence and commercial aerospace end markets. Orders expanded 28% year over year on an organic basis.

General and administrative expenses increased 4% year over year to $60.4 million while sales and marketing expenses rose 4.6% to $38.4 million. Research and development expenses inched up 2.9% to $25 million.

Exiting first-quarter 2022, ITT had cash and cash equivalents of $710.4 million, up 9.7% from $647.5 million in the previous quarter. Its commercial paper and current maturities of long-term debt were $487.0 million, while total non-current assets were $1,821.1 million.

With a market capitalization of $6.4 billion, ITT currently carries a Zacks Rank #4 (Sell).

Some better-ranked stocks are discussed below: