Crocs, Inc. (CROX - Free Report) continued with its impressive performance in first-quarter 2022, wherein the top and bottom lines not only surpassed the Zacks Consensus Estimate but also improved year over year. Solid consumer demand, as well as strength in the Crocs and HEYDUDE brands, contributed to the quarterly results. The company also noted that the HEYDUDE integration is progressing well.

Crocs’ adjusted earnings were $2.05 per share, surpassing the Zacks Consensus Estimate of $1.56. The figure also advanced 37.6% significantly from earnings of $1.49 in the year-ago period.

Revenues advanced 43.5% (or 46.7% on a constant-currency basis) year over year to $660.1 million in the reported quarter and handily beat the Zacks Consensus Estimate of $623 million. The top line witnessed growth across all regions and channels. The average selling price was $21.1 for the quarter, reflecting a year-over-year increase of 19.6%.

Direct-to-consumer revenues rose 34.6% year over year to $229 million, while Wholesale revenues rallied 48.7% to $431.2 million in the quarter under review. This was mainly driven by higher pricing, positive product mix and reduced promotions.

The adjusted gross profit soared 40% to $355.8 million. However, the adjusted gross margin contracted 130 basis points (bps) to 53.9% on the back of price increases, fewer promotional activities, and a positive product mix. Meanwhile, adjusted SG&A expenses, as a percentage of revenues, declined 60 bps to 27.3%.

Adjusted operating income grew 39.6% year over year to $175.5 million. Adjusted operating margin contracted 70 bps to 26.6% from the prior-year quarter’s 21.1%. The downside can be attributable to the dismal gross margin, which somewhat offset the SG&A decline.

Crocs ended the quarter with cash and cash equivalents of $172 million, long-term borrowings of $2,876.4 million, and stockholders’ equity of $349.2 million. The company’s liquidity position remains strong, with $371.1 million in available borrowing capacity.

Management updated the guidance for the second quarter and 2022. Revenues related to the HEYDUDE buyout are likely to be $750-$800 million on a reported basis, up from $620-$670 stated earlier. The company expects revenue growth (excluding HEYDUDE) of more than 20% for 2022. Consolidated revenues are projected to be $3.5 billion, suggesting growth of 52-55% year over year.

For second-quarter 2022, revenues are projected to grow 43-49% to $918-$957 million. In the prior-year quarter, it reported revenues of $641 million. The adjusted operating margin is estimated to be 26%, including air freight expenses of $50 million. 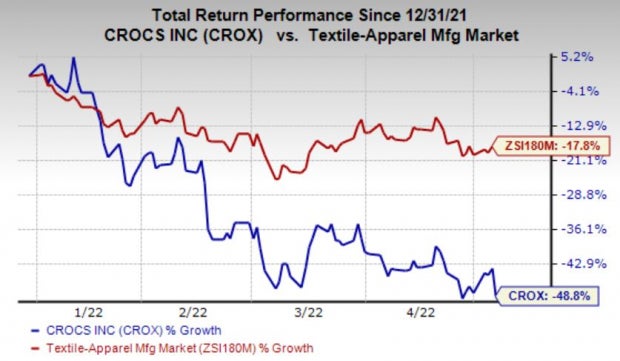 Shares of this Zacks Rank #3 (Hold) company have slumped 39.7% in the past year compared with the industry’s decline of 21.3%.

GIII Apparel, a manufacturer, designer and distributor of apparel and accessories, presently sports a Zacks Rank #1 (Strong Buy). GIL has a trailing four-quarter earnings surprise of 160.6%, on average. You can see the complete list of today’s Zacks #1 Rank stocks here.

Oxford Industries, which is involved in designing, sourcing, marketing and distributing products bearing the trademarks of its owned and licensed brands, currently flaunts a Zacks Rank #1. OXM has a trailing four-quarter earnings surprise of 96.7%, on average.

Delta Apparel, a manufacturer of knitwear products, currently has a Zacks Rank #2 (Buy). DLA has a trailing four-quarter earnings surprise of 95.5%, on average.