Higher freight rates and fuel costs, including costs for the import of aluminum cans, as well as aluminum can costs due to higher aluminum commodity pricing, led to higher cost of sales. The company also witnessed increased costs for ingredients and other input costs, including secondary packaging material, co-packing fees and production inefficiencies, which further hurt the cost of sales. Elevated distribution expenses also impacted operating expenses.

Shares of this Zacks Rank #4 (Sell) company have declined 9% in the past year against the industry’s 12.6% growth. 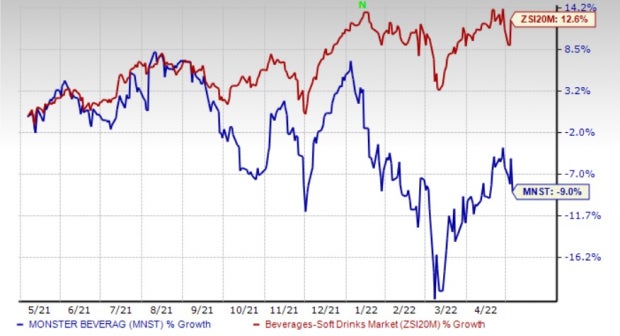 Monster Beverage’s earnings of 55 cents per share missed the Zacks Consensus Estimate of 60 cents and declined 6.8% year over year. The bottom line was impacted by inflationary operational costs for aluminum cans, shipping, freight and other inputs.

Net sales to customers outside the United States rose 20.4% to $553.4 million, representing about 36% of the total net sales.

Alcohol Brands: Net sales for the segment, which includes the various craft beers and hard seltzers purchased as part of the CANarchy transaction on Feb 17, 2022, were $15.2 million in the first quarter.

Other: Net sales for the segment, which includes some products of American Fruits & Flavors sold to independent third-parties (AFF Third-Party Products), rose 3.5% year over year to $5.9 million.

Operating income of $399.5 million declined 3.5% year over year, driven by the company’s operations in EMEA and the Asia Pacific. The operating margin contracted 700 bps to 26.3% for the reported quarter.

In the reported quarter, the company did not buy back any shares. As of May 5, 2022, it had $441.5 million remaining under the previously authorized share repurchase plan.

Archer Daniels, one of the leading producers of food and beverage ingredients, as well as goods made from various agricultural products, presently flaunts a Zacks Rank #1 (Strong Buy). The ADM stock has rallied 33.4% in the past year.

The Zacks Consensus Estimate for Archer Daniels’ sales and EPS for the current financial year suggests growth of 10.1% and 15.4%, respectively, from the year-ago reported levels. ADM has a trailing four-quarter earnings surprise of 22.3%, on average. ADM has an expected EPS growth rate of 6.4% for three to five years.

Duckhorn currently has a Zacks Rank #2 (Buy) and an expected long-term earnings growth rate of 11.3%. NAPA has a trailing four-quarter earnings surprise of 122.4%, on average. The company has gained 8.6% in the past year.

The Zacks Consensus Estimate for Duckhorn’s current financial-year sales and earnings per share suggests growth of 9.6% and 3.5%, respectively, from the year-ago reported numbers. The consensus mark for NAPA’s earnings per share has been unchanged in the past 30 days.

Ambev currently has a Zacks Rank of 2. ABEV has a trailing four-quarter earnings surprise of 3.3%, on average. It has a long-term earnings growth rate of 9.6%. The company has declined 13.2% in the past year.

The Zacks Consensus Estimate for Ambev’s current financial-year sales and earnings suggests growth of 33.8% and 6.7%, respectively, from the prior-year reported number. The consensus mark for ABEV’s earnings per share has moved up by a penny in the past 30 days.