Barring one-time items, the adjusted earnings were $5.03 per share compared with $5.64 a year ago. The figure topped the Zacks Consensus Estimate of $4.69.

Company-wide gross margin rate (as adjusted) was 35.4% compared with 36.6% in the year-ago quarter.

In the second quarter, net sales in the U.S. Consumer division remained flat year over year at $1,379.8 million. The segment delivered a profit of $428.9 million, down 2% year over year.

The company expects better weather, strong retailer promotions through Memorial Day and favorable comparisons for the rest of the season to be tailwinds. It envisions the bottom end of its U.S. Consumer unit sales guidance of +2% to -2%from the last year’s level to be the most likely outcome. For Hawthorne, based on recent trends, the company expects the low end of its sales guidance as the best outcome. SMG also noted that its earlier-communicated adjusted earnings per share guidance of $8 or more for the full year is likely to be unattainable.

Shares of Scotts Miracle-Gro have declined 55.2% in the past year against a 50% surge of the industry. 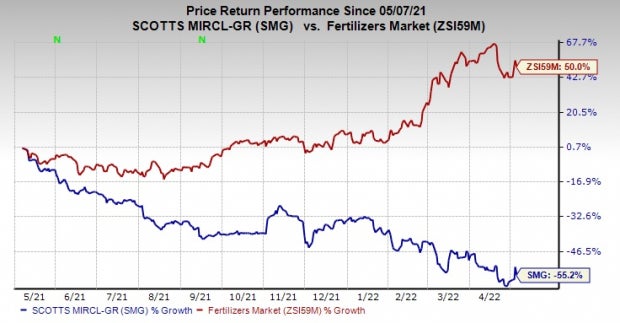 Nutrien has a projected earnings growth rate of 139.9% for the current year. The Zacks Consensus Estimate for NTR's current-year earnings has been revised 30.1% upward in the past 60 days.

Nutrien’s earnings beat the Zacks Consensus Estimate in three of the last four quarters, while missing once. It delivered a trailing four-quarter earnings surprise of roughly 5.9%, on average. NTR has rallied around 68.6% in a year and currently sports a Zacks Rank #1 (Strong Buy). You can see the complete list of today’s Zacks #1 Rank stocks here.

AdvanSix has a projected earnings growth rate of 63.4% for the current year. The Zacks Consensus Estimate for ASIX’s current-year earnings has been revised 39.4% upward in the past 60 days.

AdvanSix’s earnings beat the Zacks Consensus Estimate in three of the trailing four quarters, the average being 23.6%. ASIX has surged 48.3% in a year. The company carries a Zacks Rank #1.

Allegheny’s earnings beat the Zacks Consensus Estimate in each of the trailing four quarters, the average being 127.2%. ATI has rallied around 10.2% over a year.