Sally Beauty Holdings, Inc. (SBH - Free Report) reported drab second-quarter fiscal 2022 results, with the top and the bottom line missing the respective Zacks Consensus Estimate. Net sales and earnings declined year over year. The company witnessed more-than-anticipated pressure on the top line as inflation and supply-chain related challenges escalated in the second half of the quarter.

Sally Beauty continues to focus on its four strategic growth pillars. These include leveraging the digital platform, driving loyalty and personalization, undertaking product innovation and enhancing the supply chain.

Sally Beauty reported adjusted earnings of 47 cents per share, which missed the Zacks Consensus Estimate of 51 cents. The metric declined from 57 cents reported in the year-ago quarter.

Consolidated gross profit came in at $465.3 million, down 0.4% from $467.2 million reported in the year-ago quarter. Adjusted gross margin expanded 20 bps to 51.4%, thanks to increased product margins at Sally Beauty and Beauty Systems Group. These were somewhat offset by increased distribution and freight costs. The unfavorable sales mix shift between the greater margin Sally U.S. and lower margin Sally international operations was a downside.

Adjusted selling, general and administrative (SG&A) expenses came in at $378 million, up $15.8 million thanks to higher cost pressures from labor and expenses associated with the re-opening of international territories shut last year. These were somewhat offset by reduced variable and accrued bonus expenses. As a percentage of sales, adjusted SG&A expenses stood at 41.5%, up from 39.1% reported in the year-ago quarter.

Sally Beauty Supply: Net sales in the segment fell 3.1% to $525.8 million. Unfavorable foreign exchange had a negative impact of 90 bps on sales. The segment’s comparable sales inched down 0.5%. Net store count at the end of the quarter was 3,499, lower by 126 stores from the year-ago quarter’s level.

Beauty Systems Group: Net sales in the segment increased 0.5% to $385.6 million. Further, the segment’s comparable sales moved up 1.3%. Net store count at the end of the quarter was 1,363, down by 16 stores from the year-ago quarter’s level. Total distributor sales consultants at the end of the quarter were 712 compared with 704 in the year-ago period. 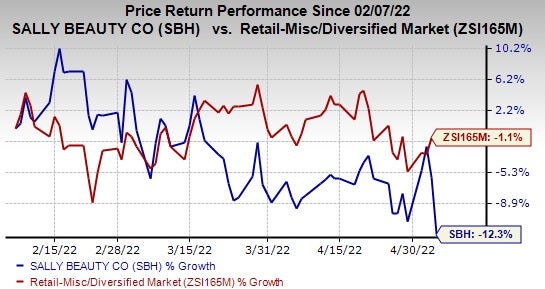 The Zacks Rank #3 (Hold) company ended the reported quarter with cash and cash equivalents of $227.4 million, long-term debt (including capital leases) of $1,381.4 million and total stockholders’ equity of $271.9 million. Management repurchased 3.2 million shares for $55.3 million in the quarter.

During the second quarter, the company provided cash flow from operations of $2.9 million. Capital expenditures came in at $17.7 million during this time.

Taking into account the volatile macro environment like the impact of inflationary pressures and significant supply chain challenges, management revised its fiscal 2022 guidance. Sally Beauty expects fiscal 2022 net sales to be flat to drop 2% year over year. Earlier, the metric was anticipated to grow 3-4% in fiscal 2022.

Net store count is anticipated to decline in the range of 1-2%, reflecting management’s focus on optimizing the store portfolio. The gross margin is likely to expand 40-60 bps year over year. The adjusted operating margin is envisioned to come in at 11%.

SBH’s shares have fallen 12.3% in the past three months compared with the industry’s 1.1% decline.

The Zacks Consensus Estimate for Target’s current financial year sales and earnings per share (EPS) suggests growth of 3.7% and 7.3%, respectively, from the year-ago period. TGT has an expected EPS growth rate of 16.5% for three-five years.

Costco, which operates membership warehouses, currently carries a Zacks Rank of 2. COST has a trailing four-quarter earnings surprise of 13.3%, on average.

The Zacks Consensus Estimate for Costco’s current financial year sales and EPS suggests growth of 13.5% and 17.6%, respectively, from the year-ago period’s corresponding readings. COST has an expected EPS growth rate of 9.1% for three-five years.

Dollar Tree, the operator of discount variety retail stores, carries a Zacks Rank of 2 at present. DLTR has a trailing four-quarter earnings surprise of 11.8%, on average. DLTR has an expected EPS growth rate of 15.5% for three to five years.

The Zacks Consensus Estimate for DLTR’s current financial year sales and EPS suggests growth of 5.6% and 36.4%, respectively, from the year-ago period’s corresponding readings.