Ultragenyx Pharmaceutical Inc. (RARE - Free Report) incurred a loss of $2.19 per share for first-quarter 2022, wider than the Zacks Consensus Estimate of a loss of $1.76. The company had reported a loss of $2.03 per share in the year-ago quarter.

Shares of Ultragenyx have lost 21% in the year so far compared with the industry's decline of 20.1%. 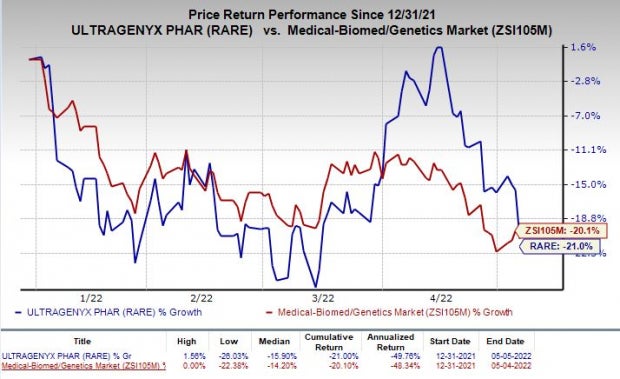 Crysvita’s total revenues were $59.4 million, up 29.1% year over year, driven by increased demand for both approved indications. Crysvita revenues in Ultragenyx territories rose 29.5% to $54.5 million in the quarter and included $45.2 million from the North America profit share territory as well as $9.4 million of net product sales for the drug in other regions. Total royalty revenues related to the sales of Crysvita in the European territory were $4.8 million. Ultragenyx sold its Crysvita rights in the European territory to Royalty Pharma in December 2019.

On the first-quarter conference call, management stated that it expects Dojolvi and Mepsevii revenues to modestly increase over time.

Operating expenses decreased 5.1% to $216.6 million in the quarter due to pipeline advancements. The company continues to support its ongoing clinical programs that are currently enrolling patients.

Ultragenyx reaffirmed the guidance it had provided earlier this year. The company continues to expect Crysvita revenues to be in the range of $250-$260 million in Ultragenyx territories. Dojolvi revenues are expected to be $55-$65 million.

The Orbit study will investigate the effect of setrusumab on fracture rate in patients aged five to less than 26 years with OI sub-types I, III, and IV as compared to placebo.

In January 2022, Ultragenyx announced a license and collaboration agreement with Regeneron Pharmaceuticals (REGN - Free Report) . Per the deal, Ultragenyx obtained rights to develop, commercialize and distribute Evkeeza (evinacumab) outside the United States. The regions include the European Economic Area.

Evkeeza is approved in these regions for use with diet and other low-density lipoprotein-cholesterol (LDL-C) lowering therapies to treat patients aged 12 years and older with homozygous familial hypercholesterolemia (HoFH).

Evkeeza was discovered and developed by Regeneron. REGN had launched the medicine in the United States in February 2021.

The collaboration with Regeneron for Evkeeza gives Ultragenyx a fourth approved product that can add to its revenues, along with Crysvita, Mepsevii, and Dojolvi.

Ultragenyx, along with partner GeneTx, is developing GTX-102 for treating patients with Angelman syndrome. An interim update on the study is expected in mid-2022.

Earnings of Vertex have surpassed estimates in three of the trailing four quarters and missed the same on the other occasion.

Earnings of Applied Therapeutics surpassed estimates in two of the trailing four quarters, met the same once and missed the same on the other occasion.