Kronos Worldwide, Inc. (KRO - Free Report) recorded profits of $57.5 million or 50 cents per share in first-quarter 2022, up from $19.6 million or 17 cents in the year-ago quarter. The figure topped the Zacks Consensus Estimate of 28 cents per share.

The bottom line in the reported quarter was driven by higher income from operations resulting from increased average titanium dioxide (TiO2) selling prices.

TiO2 production volumes were up 6% year over year in the first quarter. TiO2 sales volumes increased 2% year over year, helped by sustained high demand and improvements in delivery and distribution networks.

TiO2 segment profit increased around 128% to $86.8 million year over year in the reported quarter. This upside was driven by a rise in average TiO2 selling prices, which were partly offset by increased production costs, including higher costs for raw materials and energy.

Kronos Worldwide ended the quarter with cash and cash equivalents of $350 million, down roughly 6% year over year. Long-term debt was $443.8 million, a roughly 5% year-over-year decline.

Kronos expects global demand for consumer products to remain strong through the balance of 2022. It is seeing certain disruptions in global supply chains, including raw materials constraints as well as delays in transportation and logistics. It also expects feedstock as well as production costs, including raw material and related shipping costs and considerably higher energy and utility costs, to rise through the remainder of 2022. Based on strong demand, TiO2 selling prices are projected to increase through the balance of the year.

The company expects its sales and income from operations for 2022 to be higher on a year-over-year basis. However, its margins are expected to be affected by cost increases.

Shares of Kronos have declined 11.7% in the past year compared with a 7.2% fall of the industry. 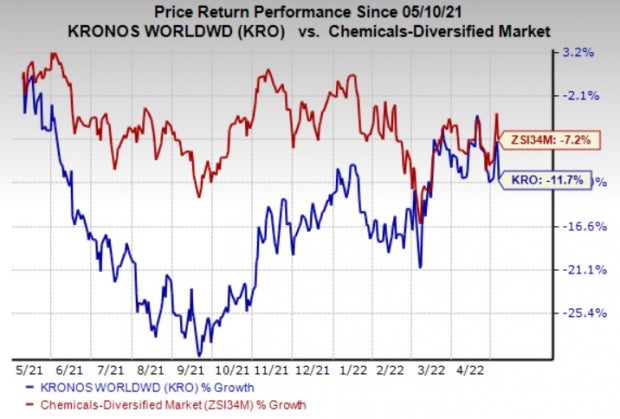 Steel Dynamics beat the Zacks Consensus Estimate for earnings in each of the last four quarters, the average being roughly 2.5%. STLD has gained around 25% in a year.

Commercial Metals beat the Zacks Consensus Estimate for earnings in three of the last four quarters while missed once. It has a trailing four-quarter earnings surprise of roughly 16%, on average. CMC has gained around 21% in a year.

AdvanSix beat the Zacks Consensus Estimate for earnings in three of the trailing four quarters while missed once. It has a trailing four-quarter earnings surprise of roughly 23.6%, on average. ASIX has rallied around 50% in a year.