Revenues came in at $38.1 million, which comfortably beat the Zacks Consensus Estimate of $24 million. Revenues were up 142.7% year over year, driven by the recognition of fees of $21.6 million from Huadong Medicine and a portion of upfront payment from Eli Lilly (LLY - Free Report) during the first quarter. However, these increases were partially offset by lower non-cash royalty revenues.

Despite beating estimates, shares of ImmunoGen were down 4.5% on May 6, most likely due to the weakness in the broader market. Shares of the company have declined 37.6% so far this year in comparison with the industry’s 24.8% decrease. 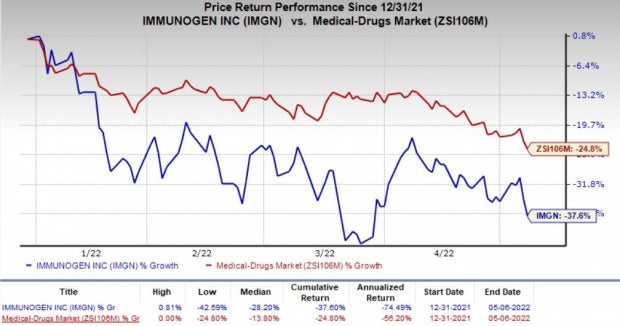 First-quarter revenues included $6.4 million in non-cash royalty revenues, down 58.6% year over year. This substantial decline was on account of the absence of a significant amount of non-cash royalties from Roche Holding AG’s (RHHBY - Free Report) marketed drug Kadcyla, recorded in the prior-year quarter.

We note that the company’s ADC technology is used in Roche's Kadcyla. The drug is one of the key drivers of RHHBY’s top line.

ImmunoGen recorded license and milestone fees of $30.9 million in the first quarter compared with $0.2 million in the year-ago period. This significant increase was mainly driven by the recognition of $21.6 million of fees previously received and deferred related to its collaboration agreement with Huadong Medicine. The company also recorded $9.2 million of a $13.0 million upfront payment related to its newly signed global licensing agreement with Eli Lilly (LLY - Free Report) during the first quarter.

ImmunoGen granted Lilly exclusive rights to research, develop and commercialize antibody-drug conjugates or ADCs combining targets selected by the latter based on ImmunoGen’s novel camptothecin technology. Lilly will bear all costs related to the research and development of candidates chosen for the program. ImmunoGen is entitled to receive up to $1.7 billion in potential exercise fees and milestone payments from Lilly, per the deal.

ImmunoGen recorded research and development support revenues of $0.8 million compared with $4,000 in the year-ago period.

For the quarter, research and development expenses increased 28.7% from the year-ago level to $44.3 million, driven by higher costs to support commercial readiness, including regulatory filing fees, for its lead pipeline candidate, mirvetuximab soravtansine.

General and administrative expenses were up 63.1% year over year to $16.6 million for first-quarter 2022, primarily due to higher costs to build commercial capabilities to support the launch of mirvetuximab, following a potential approval.

ImmunoGen maintained its revenue guidance for the full year between $75 million and $85 million.

The company continues to expect operating expenses in the range of $285-$295 million.

IMGN expects to end 2022 with cash and cash equivalents in the range of $245-$255 million. The company anticipates cash resources to be sufficient to fund operations into 2024.

ImmunoGen is evaluating its lead pipeline candidate, mirvetuximab soravtansine, in a pivotal study — SORAYA — in folate receptor alpha (FRα)-high platinum-resistant ovarian cancer patients who have received prior systemic treatments once, twice or thrice. Last November, the company announced that the study met its primary endpoint of objective response rate. Based on this data, IMGN filed a biologics license application (BLA) with the FDA, seeking accelerated approval of mirvetuximab in March 2022. The company is seeking an accelerated approval for the candidate and has requested a priority review. It expects the FDA to accept its BLA submission by the end of May and a potential approval by year-end.

ImmunoGen is enrolling patients in the phase III MIRASOL study as a monotherapy in patients with platinum-resistant ovarian cancer with FR alpha-high. It anticipates top-line data in early 2023. The company previously expected the top-line data readout from the MIRASOL study in the third quarter of 2022. The delay in the readout is due to the recent reforecast of projected progression-free-survival events, which are now anticipated to accrue in the fourth quarter of 2022. Data from this study will support continued approval of mirvetuximab in the given indication.

Other than mirvetuximab soravtansine, the company has another promising candidate, pivekimab sunirine (formerly IMGN632) in its pipeline. IMGN is evaluating pivekimab sunirine as a monotherapy in the pivotal phase II CADZENA study in patients with blastic plasmacytoid dendritic cell neoplasm. Preliminary efficacy data from the CADZENA study is expected by the end of 2022.

ImmunoGen was developing the drug in collaboration with Jazz Pharmaceuticals (JAZZ - Free Report) . However, Jazz opted out of the collaboration in 2020. Resultantly, JAZZ has relinquished the rights to receive any royalty payments on the candidate’s sales, upon potential approval.