Envestnet, Inc.(ENV - Free Report) stock has lost 12.7% since its first-quarter 2022 earnings release on May 5. The downfall can be attributed to lower-than-expected revenue performance. 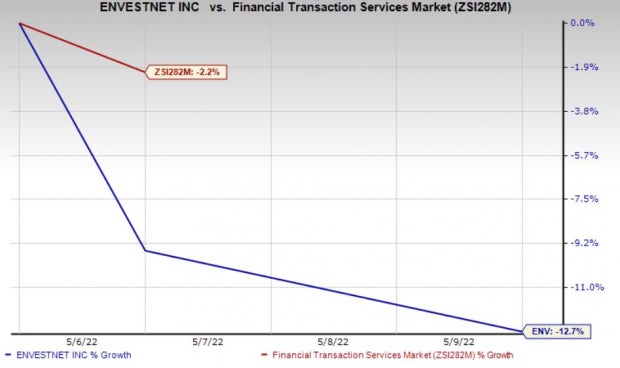 Adjusted earnings per share of 47 cents outpaced the Zacks Consensus Estimate by 4.4% but declined 27% year over year. The reported figure lies above the guided range of 44 to 45 cents.

The company generated around $3.26 million of cash from operating activities. CapEx was $3.89 million.

For second-quarter 2022, Envestnet expects adjusted earnings per share between 45 and 46 cents. The Zacks Consensus Estimate of 53 cents lies above the guidance.

Total revenues are estimated between $324 million and $326 million. The Zacks Consensus Estimate of $330.55 million lies above the guidance.

Total revenues are now anticipated between $1.330 billion and $1.340 billion compared with the prior-guided range of $1.36-$1.385 billion. The Zacks Consensus Estimate of $1.35 billion lies above the updated guidance.

The company now projects adjusted EBITDA of $255-$260 million compared with the prior-guided range of $270-$280 million.