The earnings season for the Auto-Tires-Trucks sector has reached its tail end. Last week, a host of auto companies came out with their first-quarter 2022 earnings release. Both the S&P 500 auto firms that reported quarterly results last week— including the truck engine giant Cummins (CMI - Free Report) and auto equipment provider BorgWarner (BWA - Free Report) — delivered earnings beat. The bottom line for BorgWarner, however, declined year over year, while that of Cummins remained flat compared with the corresponding quarter of 2021.

Last week, a number of automakers released their vehicle sales data for April. Most of them saw double-digit declines in sales volumes owing to the chip crisis, supply-chain disruptions and inventory dearth. Per the Automotive News Research & Data Center, cumulative U.S. vehicles sales (for the automakers who reported sales figures) fell more than 21% on a year-over-year basis. LMC Automotive estimated that the industry volume declined 17% year on year last month.

Meanwhile, passenger vehicle sales in China also plunged 36% year over year to 1.06 million units, marking the biggest decline since March 2020. The resurgence of COVID-19 cases and the subsequent lockdown restrictions impacted production and kept buyers away from showrooms. Per China Passenger Car Association, production and demand for luxury cars suffered a massive blow, with sales plummeting 54%. In contrast, sales of new energy vehicles rose more than 50% as customers were quick to place orders for the same in anticipation of rising prices.

Cummins reported first-quarter 2022 earnings of $4.04 per share, flat year over year. The figure topped the Zacks Consensus Estimate of $3.55.Higher-than-expected EBITDA in the Engine segment resulted in the outperformance. Cummins’ revenues totaled $6,385 million, up from $6,092 million recorded in the year-ago quarter. The top line beat Zacks Consensus Estimate of $6,026 million.

BorgWarner reported adjusted earnings of $1.05 per share in first-quarter 2022, declining from $1.21 recorded in the prior-year quarter. The bottom line, however, beat the Zacks Consensus Estimate of 80 cents per share. Higher-than-anticipated revenues across all segments resulted in the outperformance. Net sales of $3,874 million outpaced the Zacks Consensus Estimate of $3,639.8 million but declined 3.4% year over year.

Goodyear reported first-quarter 2022 adjusted earnings per share of 37 cents, surpassing the Zacks Consensus Estimate of 18 cents. Higher-than anticipated revenues and operating income across the Europe, Middle East and Africa and the Americas segments, respectively, buoyed the results. The bottom line decreased 14% from the year-ago figure of 43 cents. The company registered net revenues of $4,908 million, surging 39.8% on a year-over-year basis as well as beating the Zacks Consensus Estimate of $4,893.2 million.

In the reported quarter, tire volume was 45 million units, up 29% from the year-ago period. Replacement tire shipments increased 35%, benefiting from the buyout of Cooper Tire. GT had cash and cash equivalents of $1,053 million as of Mar 31, 2022. Long-term debt and finance leases amounted to $7,450 million. Capital expenditure in the quarter was $276 million, up from $185 million in the year-ago quarter.

Lear reported first-quarter 2022 adjusted earnings of $1.80 per share, which plunged around 51.7% year over year. The bottom line, however, surpassed the Zacks Consensus Estimate of $1.56 per share. Higher-than-expected sales from both the company’s segments led to the upside. In the reported quarter, revenues declined around 2.7% year over year to $5,208.4 million. The top line beat the Zacks Consensus Estimate of $4,957.8 million.

Standard Motor reported first-quarter 2022 adjusted earnings of 92 cents per share, beating the Zacks Consensus Estimate of 81 cents.  However, the bottom line declined from the prior-year quarter’s 97 cents. Total revenues rose 16.6% year over year to $323 million, surpassing the Zacks Consensus Estimate of $311 million. Gross profit rose to $89.8 million from the year-ago quarter’s $83.8 million. SMP expects its consolidated gross margin in the band of 28-29% for 2022. 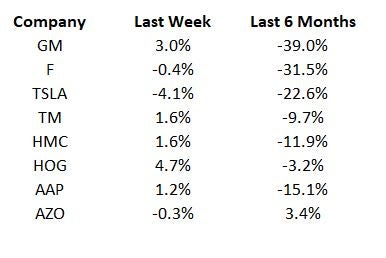 Stay tuned for the quarterly results of Japanese auto giants. Also, watch out for any update on how automakers will tackle the semiconductor shortage —aggravated by the Russia-Ukraine war and rising COVID-19 infections— and make changes in the business operations.