Per the terms of the deal, Equinor will divest its 7.604% stake in three Ekofisk production licenses, 19% in the Martin Linge field and 6.6% in the Tor field.

The Ekofisk production licenses include PL018, PL018B and PL275, which cover the Ekofisk, Eldfisk and Embla fields. The divestment also involves Equinor’s 18.5% interest in the Norpipe Oil pipeline, which transports oil from the Greater Ekofisk Area to land.

Equinor will receive $1 billion in cash and additional contingent payments linked to oil and gas prices for 2022 and 2023. Following the divestment, Equinor will not have ownership interests in the Greater Ekofisk Area. However, the company will retain a 51% stake in Martin Linge and continue as the field operator.

Per Sval Energi, the deal adds 30,000 barrels of oil equivalent per day (boe/d) of production to its portfolio. The transaction puts Sval Energi on track to reach the overall production of 100,000 boe/d in 2023. The agreement aligns well with the company’s growth ambition.

Ekofisk has significantly contributed to Equinor’s oil and gas journey as the first producing field on the Norwegian Continental Shelf. However, Equinor has limited participation in the Greater Ekofisk Area. Hence, it decided to divest its stake amid high prices and divert capital to other key areas for the business.

The transaction is expected to complete in the second half of 2022, subject to customary government and license approvals.

Shares of EQNR have outperformed the industry in the past six months. The stock has gained 28.5% compared with the industry’s 26.4% growth. 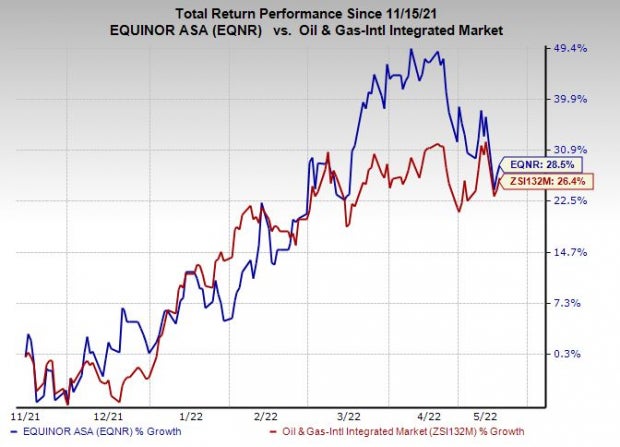 Investors interested in the energy sector might look at the following companies that also presently sport a Zacks Rank #1. You can see the complete list of today’s Zacks #1 Rank stocks here.

Shares of the company have gained 36.2% in the past six months, outperforming the industry’s 28.5% rise. EOG Resources announced a special dividend of $1.80 per share. The special dividend is likely to be paid out on Jun 30 to stockholders of record as of Jun 15.

Here's How Coca-Cola (KO) Stock is Poised Amid Cost Headwinds