Editas Medicine, Inc. (EDIT - Free Report) announced that the FDA has granted Orphan Drug designation to its investigational gene-editing medicine, EDIT-301, for the treatment of beta thalassemia, a devastating disease that leads to severe anemia, organ failure and premature death.

The Orphan Drug designation is granted by the FDA to a drug or biologic intended to treat a rare disease or condition, which generally includes one that affects fewer than 200,000 individuals in the United States. The designation also includes incentives, including financial aid for clinical testing, and seven-year marketing exclusivity in the event of regulatory approval.

Per the company, the Orphan Drug tag for EDIT-301 for treating beta thalassemia underlines the urgent need for new treatment options for the given patient population.

Shares of Editas were up 4.5% in after-hours trading on Thursday following the announcement of the news. The stock has plunged 59.3% so far this year compared with the industry’s decline of 26.7%. 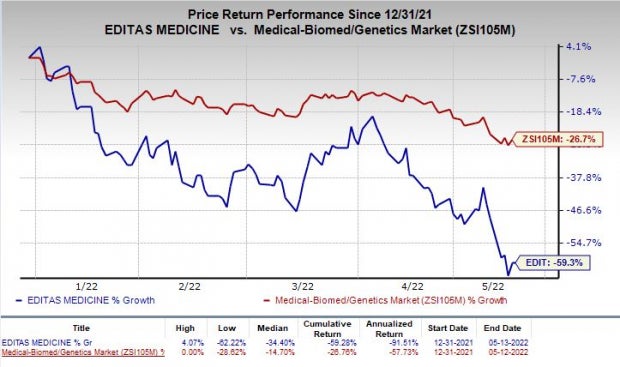 The FDA granted Rare Pediatric Disease designation to EDIT-301 for the treatment of beta thalassemia in April 2022.

EDIT-301 is also evaluating the safety and efficacy of EDIT-301 for treating sickle cell disease (“SCD”). EDIT-301 has also been granted a Rare Pediatric Disease for treating SCD.

The company is currently enrolling participants in the phase I/II RUBY study for treating SCD and expects to begin dosing in the first half of 2022. Top-line data from the same is expected by 2022-end.

Last month, the company dosed the first pediatric patient in the phase I/II BRILLIANCE study evaluating EDIT-101 for the treatment of blindness due to LCA10. Currently, there is no therapy approved for treating LCA10.

An update from the BRILLIANCE study is expected in the second half of 2022.

Earnings of Applied Therapeutics have surpassed estimates in two of the trailing four quarters, met the same once and missed the same on the other occasion. APLT delivered an earnings surprise of 2.58% on average.

Earnings of Aeglea BioTherapeutics have surpassed estimates in two of the trailing four quarters and missed the same on the other two occasions. AGLE delivered an earnings surprise of 9.47% on average.

Earnings of EyePoint Pharmaceuticals have surpassed estimates in one of the trailing four quarters and missed the same on the other three occasions. EYPT delivered an earnings surprise of -5.80% on average.

Verizon (VZ), Visionable Tie Up to Boost Healthcare With 5G