In the past week, Latin American carriers Azul (AZUL - Free Report) and Copa Holdings (CPA - Free Report) reported earnings results for first-quarter 2022. That a few Latin carriers were scheduled to report their earnings numbers over the past few trading days, was stated in the previous week’s write-up. Improvement in air-travel demand in the region, courtesy of widespread vaccination, aided results of both the above-mentioned carriers.

1 Azul incurred a loss (excluding $4.89 from non-recurring items) of $1.14 per share in the first quarter of 2022, narrower than the Zacks Consensus Estimate of a loss of $1.21. The amount of loss narrowed year over year as well. Total revenues of $610.9 million missed the Zacks Consensus Estimate of $638.5 million but increased 82.9% year over year as air-travel demand improved, courtesy of widespread vaccination programs in Brazil.

2. Copa Holdings reported first-quarter 2022 earnings (excluding 23 cents from non-recurring items) of 70 cents per share, which surpassed the Zacks Consensus Estimate of 36 cents.  In the year-ago quarter, CPA had incurred a loss of $2.23 per share. Quarterly revenues of $571.6 million surpassed the Zacks Consensus Estimate of $566.1 million and rose significantly year over year, thanks to an improvement in air-travel demand.

Copa Holdings expects second-quarter 2022 operating margin to be only 3-5%. CPA expects capacity to be 5.9 billion, equivalent to 96% of the second-quarter 2019 level. Load factor (percentage of seats filled by passengers)is estimated to be around 86% in the second quarter. Fuel price is estimated to be $4 per gallon. For the full year, CPA expects capacity to reach approximately 98% of the 2019 level.

4. To attract more traffic, Southwest Airlines aims to spend more than $2 billion on improving the flying experience of its passengers. By making this huge investment, LUV intends to introduce bigger overhead bins for luggage, quicker internet onboard and outlets in every single seat, apart from enhancing the cocktail menu. Among other benefits, LUV aims to introduce a fare category called Wanna Get Away Plus, later this month.

Upbeat traffic in its domestic markets is leading to the rosy scenario on a consolidated basis. In April, domestic traffic and capacity improved 192.4% and 211.6%, respectively. On the domestic front, 187.9% more passengers boarded GOL’s flights in April 2022 than a year ago. 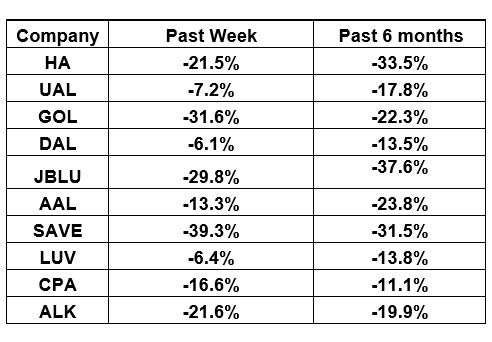 With the first-quarter 2022 earnings season almost over for the airlines, stay tuned for the usual news updates in the space.