Further, the deal, which comprises an all-in-one system, a stackable low-voltage and high-voltage storage system and a single or three-phase hybrid inverter, enhances JKS’ position in the D-A-CH region comprising Germany, Austria and Switzerland for 2022 and 2023.

The increased adaptation of renewable sources of energy is driving the demand for solar-based energy in Europe as it boasts the most cost-efficient pathway to attain carbon neutrality. This, in turn, exhibits solid growth potential in the energy storage market, which could be instrumental to Jinko Solar’s growth prospects.

Going forward, per the report from Wood Mackenzie, the Europe energy storage market is anticipated to expand 20-fold between 2022 and 2031.

With an already established position with solar modules in the European solar market that offers an intriguing and upbeat growth opportunity, particularly in the battery storage section, indicates solid prospects for JKS. Hence, the recent collaboration with Memodo provides JinkoSolar with a competitive edge in the European energy storage market.

To reap the benefits of the growing European solar market, several solar players are also giving their efforts.

In May 2022,Enphase Energy (ENPH - Free Report) announced that Enphase engineers approved the combination of Enphase IQ Batteries with third-party inverters in Belgium and Germany to help meet the increasing demand for energy independence in the region. Belgium and Germany remain two key and fast-growing European markets for Enphase products.

The Zacks Consensus Estimate for Enphase’s 2023 earnings has been revised upward by 5% in the past 60 days. ENPH stock has rallied 33.2% in the past year.

In May 2022,Canadian Solar (CSIQ - Free Report) announced that it entered the utility scale energy storage market in the United Kingdom after signing agreements to provide integrated energy storage systems and Engineering, Procurement and Construction services for four battery storage projects. Pulse Clean Energy is the owner of the four projects of more than 100 megawatt-hour (MWh).

In a year, shares of JinkoSolar have rallied 67.5% against the industry’s decline of 17.8%. 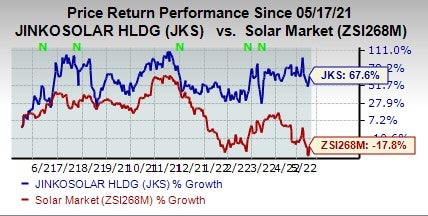