Abiomed, Inc. (ABMD - Free Report) is well poised for growth in the coming quarters, backed by strength in its Impella product line. A robust fourth-quarter fiscal 2022 performance, along with a few regulatory approvals, is expected to contribute further. Third-party reimbursement and stiff competitive forces persist.

The renowned global provider of medical products designed to assist or replace the pumping function of the failing heart has a market capitalization of $11.58 billion. The company projects 19% growth for the next five years and expects to maintain its strong performance. It has delivered an earnings surprise of 7.9% for the past four quarters, on average. 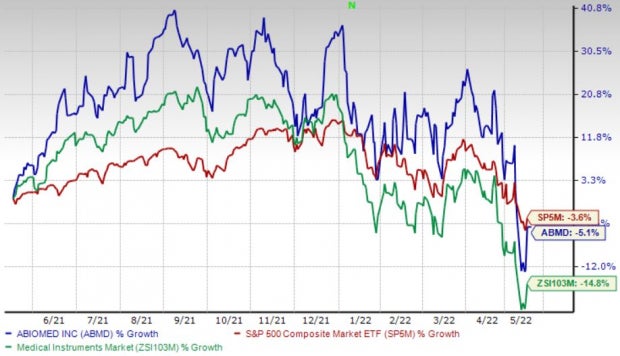 Strength in Impella: Abiomed’s flagship product line, Impella, has continued to be a growth driver, which raises our optimism. The company is focused on achieving its fiscal 2021 Abiomed 2.0 goals, which will drive the rollout of its remote interface technology with SmartAssist and Impella Connect. The company continues to invest in the pipeline of advanced technologies, including the XR Sheath, Impella ECP, Impella Connect, Impella BTR and new AI algorithms. Abiomed’s newest heart pump, the Impella 5.5 with SmartAssist, has received FDA pre-market approval (“PMA”) based on its safety and efficacy in the therapy of cardiogenic shock.

Regulatory Approvals: We are optimistic about the slew of regulatory approvals for Abiomed’s Impella product line of late. During the fourth-quarter fiscal 2022 earnings call, Abiomed confirmed that it had filed a PMA supplement for the Impella RP with insertion through the internal jugular vein or IJ in the neck.

In April, Abiomed announced that the FDA has approved the use of sodium bicarbonate in the purge fluid of the Impella product as an alternative to heparin for certain patients.

Strong Q4 Results: Abiomed’s solid fourth-quarter fiscal 2022 results buoy optimism. The company saw continued strength in its global Impella revenues. Abiomed’s progress regarding its Impella product line, like successfully treating the first Japanese patient with the Impella 5.5 with SmartAssist device and the number of patients treated globally with the Impella 5.5 with SmartAssist surpassing 5,000 in April, raise investors’ optimism regarding the stock. The company’s robust geographical performance is also promising.

Stiff Competition: Abiomed faces intense competition from other companies offering circulatory care products that are subject to rapid technological change as well as evolving industry requirements and standards. It competes with companies that have better resources. The company’s ability to compete effectively depends upon its expertise in distinguishing itself and its products from its competitors and their products.

Third-Party Reimbursement: Abiomed depends on third-party reimbursement to its customers for market acceptance of its products. Sales of medical devices largely depend on the reimbursement of patients’ medical expenses by government healthcare programs and private health insurers. Without government reimbursement or third-party insurers’ payments for patient care, the market for Abiomed’s products will be limited.

Abiomed is witnessing a positive estimate revision trend for 2022. In the past 90 days, the Zacks Consensus Estimate for its earnings has moved 0.7% north to $4.62.

The Zacks Consensus Estimate for the company’s first-quarter fiscal 2023 revenues is pegged at $277.1 million, suggesting a 9.7% improvement from the year-ago quarter’s reported number.

Omnicell, flaunting a Zacks Rank #1 (Strong Buy) at present, has an estimated long-term growth rate of 16%. OMCL’s earnings surpassed estimates in three of the trailing four quarters, the average beat being 13.4%. You can see the complete list of today’s Zacks #1 Rank stocks here.

Patterson Companies has an estimated long-term growth rate of 9.9%. PDCO’s earnings surpassed estimates in three of the trailing four quarters, the average beat being 2.7%. It currently carries a Zacks Rank #2 (Buy).

Patterson Companies has lost 12.9% compared with the industry’s 5.5% fall over the past year.

AMN Healthcare has lost 4.6% compared with the industry’s 62.4% fall over the past year.