Chimerix (CMRX - Free Report) , along with its earnings release, announced that it is planning to limit its investment in a retrospective Natural Disease History (NDH) study of recurrent H3 K27M-mutant glioma to support a potential approval for its lead pipeline candidate, ONC201. The company is developing the candidate as a treatment for recurrent gliomas that harbor the H3 K27M mutation.

Chimerix is now planning to initiate a phase III study that will evaluate ONC201 in patients with recurrent gliomas who harbor the H3 K27M-mutation. The company has designed the study to support either a confirmatory approval or first approval and is currently in discussion with the FDA to finalize the study design. It expects to start the late-stage study this year.

Please note that the FDA had previously requested the retrospective NDH study but now informed Chimerix that it no longer expects to rely on the NDH study data to take a regulatory decision due to the limitations inherent in the NDH studies.

The initiation of the late-stage study on ONC201 will significantly delay any potential approval for the candidate.

Moreover, Chimerix decided, following an internal review, to discontinue its DSTAT program in order to allocate resources to higher-priority oncology programs. The company was developing the candidate as a first-line treatment for acute myeloid leukemia.

Shares of Chimerix plunged 60.9% on May 16, following the unfavorable pipeline updates. The stock was also down in pre-market trading on May 17. In fact, the company’s shares have declined 74.2% compared with the industry’s decrease of 20.3%. 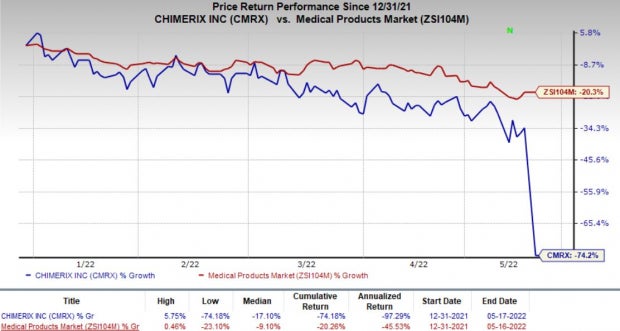 In a separate press release, Chimerix announced the sale of its medical countermeasure product for smallpox, Tembexa, to Emergent BioSolutions (EBS - Free Report) for an upfront payment of $225 million. The FDA approved Tembexa in June 2021.

Per the terms of the agreement, Emergent will also pay Chimerix up to $100 million in milestone payments as well as royalties on Tembexa sales. Emergent will gain exclusive worldwide rights to the smallpox countermeasure product. The transaction is expected to be closed as early as the second quarter of 2022. The addition of Tembexa will boost its already robust medical countermeasure portfolio.

The Zacks Consensus Estimate for Alkermes’ 2022 loss per share has narrowed from 13 cents to 3 cents in the past 30 days. ALKS has risen 24.4% in the year-to-date period.

Earnings of Alkermes beat estimates in all the last four quarters, the average surprise being 350.48%.

The Zacks Consensus Estimate for Sesen Bio’s 2022 loss per share has improved from 33 cents to 32 cents in the past 30 days. SESN has declined 49.2% in the year so far.

Earnings of Sesen Bio beat estimates in three of the last four quarters and missed the mark once, the average being 69.94%.