This contract, expected to be completed by Sep 30, 2024, offered a ceiling increase worth $75 million. The total cumulative face value of the contract is $275 million.

Work related to this deal will be executed in Tucson, AZ.

Advantages of the StormBreaker Bomb

Raytheon Technologies' SDB II enables warfighters to hit moving targets in all-weather conditions, especially when the visibility is limited. SDB-II is capable of three modes: a millimeter-wave radar that detects and tracks targets in every weather, imaging infrared for improved target discrimination and a semi-active laser to track lasers in the air or on the ground. Further, the weapon can fly more than 45 miles to strike mobile targets.

Increasing geopolitical tensions across the globe have prompted nations to strengthen their defense systems. With rapid technological upgrades, missile defense has been playing a pivotal role in a nation's defense strategy. To this end, Raytheon Technologies' Missiles & Defense unit has secured significant awards from the United States as well as international customers due to its high-end, combat-proven arsenals. The latest contract win is a testament to that.

Per Mordor Intelligence, the missiles and missile defense systems market is estimated to register a CAGR of more than 8% between 2022 and 2031. The growing conflicts between various countries and the increasing number of investments being made by nations in missile defense systems are expected to drive the market. This, in turn, is likely to create solid growth opportunities for Raytheon, a prominent missile maker.

Northrop is a prominent developer of missile systems and counter systems, including strategic deterrents as well as subsystems and components. To strengthen its position in the missile market, Northrop acquired Orbital ATK in 2018, an erstwhile industry leader in providing missile components across the air, sea and land-based systems.

Northrop reported first-quarter 2022 earnings of $6.10 per share, which surpassed the Zacks Consensus Estimate by 2.5%. NOC boasts a long-term earnings growth rate of 6.1%.

Lockheed’s Missiles and Fire Control business unit develops, manufactures and supports advanced combat missiles and rockets for military customers, including the U.S. Army, Navy, Air Force, Marine Corps, NASA and dozens of foreign allies. Some of its prominent products include the PAC-3 missile as well as the Terminal High Altitude Area Defense missile.

In the past year, Raytheon Technologies’ shares have gained 6.8% against the industry’s 1.4% decline. 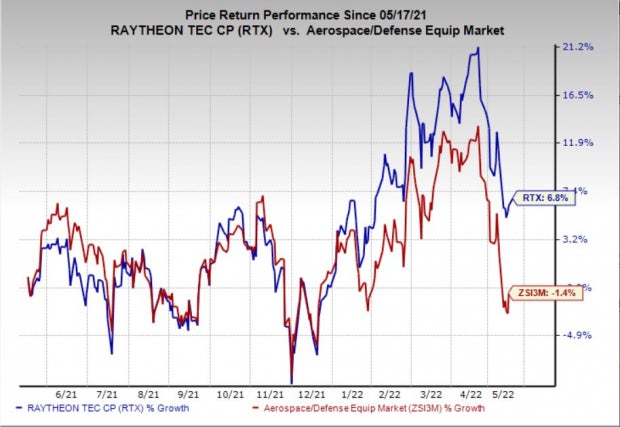