Emerson Electric Co. (EMR - Free Report) recently announced that it has completed the combination of its industrial software businesses with Aspen Technology, Inc. (AZPN - Free Report) . The cash-and-stock deal was announced in October 2021.

Emerson merged its software businesses, OSI Inc. and the Geological Simulation Software, with Aspen Technology to form new AspenTech. Per the terms of the deal announced in October, the transaction involved Aspen Technology’s shareholders obtaining $87 per share in cash and 0.42 share of the combined entity in exchange for each share they owned. As part of the deal, Emerson offered $6 billion to own 55% of the combined entity while the rest 45% is owned by Aspen Technology’s shareholders.

With the transaction, Emerson will gain control of a high-valued pure-play industrial software leader, expedite its software strategy and realize substantial synergies, thus boosting its shareholders’ value. With this majority ownership in the new AspenTech, Emerson will likely achieve the flexibility and platform required for strategic capital deployment for growth through investments and acquisitions. The transaction is expected to create a win-win scenario for both the companies as it enhances the commercial alliance between them and strengthens their partnership in technology sharing, driving innovation and developing new products.

Shares of new AspenTech will use the ticker symbol "AZPN" (ticker symbol of Aspen Technology previously) for trading on Nasdaq effective from May 17, 2022.

Emerson, with a $50.2-billion market capitalization, currently carries a Zacks Rank #3 (Hold). The company is poised to benefit from strength across its discrete, life sciences, chemical and power end markets. Also, the company is likely to benefit from acquisitions it made over time. However, escalating costs and expenses are a major concern for the company. Also, high debt levels can increase Emerson’s financial obligations. 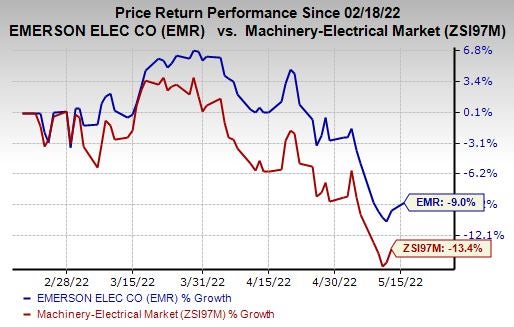 In the past three months, the company’s shares have lost 9% compared with the industry’s decline of 13.4%.

Some better-ranked stocks from the Zacks Industrial Products sector are discussed below.

Here's Why it is Worth Investing in Tetra Tech (TTEK) Stock