Lenacapavir is Gilead’s potential first-in-class, investigational long-acting HIV-1 capsid inhibitor in development for the treatment and prevention of HIV-1 infection.

In December 2021, the FDA placed a clinical hold on the use of injectable lenacapavir in borosilicate vials in all ongoing clinical studies for HIV treatment and HIV PrEP.

The hold was due to emerging concerns about the compatibility of vials made of borosilicate glass with lenacapavir solution, which could potentially lead to the formation of sub-visible glass particles in the solution of lenacapavir.

The FDA took the decision following its review of Gilead’s comprehensive plan and corresponding data on the storage and compatibility of lenacapavir injection with an alternative vial made from aluminosilicate glass.

Consequently, screening and enrollment of study participants and the dosing of injectable lenacapavir can continue.

We remind investors that the FDA granted Breakthrough Therapy Designation to develop lenacapavir to treat HIV infection in heavily treatment-experienced patients with multi-drug resistance in combination with other antiretroviral drugs in 2019.

However, the FDA has issued a complete response letter (CRL) for its new drug application (NDA) in this population due to vial compatibility.

The safety, efficacy and dosing of lenacapavir are being evaluated in multiple ongoing clinical studies, including CAPELLA, a phase II/III, double-blinded, placebo-controlled global multicenter study. The study is designed to evaluate the antiviral activity of lenacapavir administered every six months as a subcutaneous injection in heavily treatment-experienced people with multi-drug resistant HIV-1 infection.

Gilead’s stock has lost 14.3% so far in the year compared with the industry's decline of 25%. 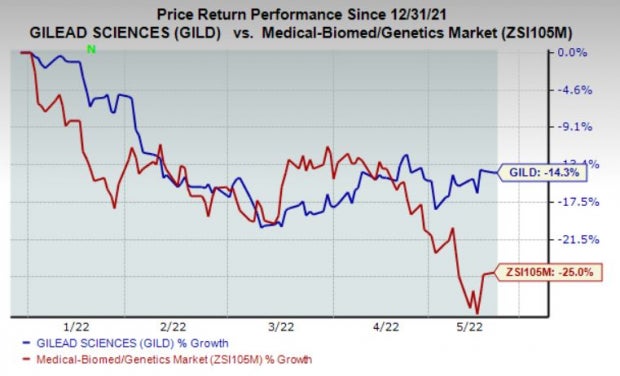 The HIV franchise is the lead growth driver for Gilead propelled by the solid uptake of Biktravy.

Concurrently, Gilead is making efforts to develop its oncology business to diversify its revenue base as competition is stiff in the HIV business from the likes of GlaxoSmithKline (GSK - Free Report) . Also, the loss of exclusivity for Truvada has hurt the company’s business.

Loss estimates for ALKS for 2022 have narrowed to 3 cents from a loss of 14 cents in the past 60 days. Alkermes surpassed estimates in all of the trailing four quarters, the average surprise being 350.48%.

Loss estimates for GERN for 2022 have narrowed by 6 cents in the past 60 days. Geron surpassed estimates in three of the trailing four quarters, the average surprise being 1.07%.