Tesla (TSLA) Delays Shanghai Gigafactory Ramp Up to Next Week

Tesla Inc. (TSLA - Free Report) recently announced that it will be delaying the ramp-up of its Shanghai Gigafactory to pre-shutdown production levels as it continues to remain on one closed-loop shift for at least another week. The delay will likely result in a shortage of around 10,000 vehicles produced in the quarter.

Due to the resurgence of COVID-19 cases in China and stringent lockdowns in the first quarter, Tesla was forced to shut down production at its Shanghai factory last month.

The automaker was finally able to restart production on Apr 19 after a 22-day hiatus.

Tesla had brought back around 8,000 people to work in a closed-loop shift to help limit worker movements in the city. Recent reports suggest that the electronic vehicle maker was to increase the facility’s output to 2,600 units per day, close to its pace, before implementing the new set of lockdowns, which had been intended to be accomplished by adding another shift of workers starting May 16.

However, it has been reported that the plan has been postponed to at least May 23 on account of challenges pertaining to the sleeping accommodation for the factory’s incoming second shift of workers.

Now it plans to stick to one shift for the plant for the current week with a daily output of around 1,200 units and stated that it would now aim to increase output to 2,600 units per day from May 23.

Many businesses in Shanghai are allowed to re-open if they can make provisions for a closed-loop system where workers eat and sleep at the factories to limit exposure to the virus. So for Tesla to introduce another shift would call for the accommodation of a thousand more employees at the factory, which might turn out less feasible.

Apart from this, Tesla continues to battle supply issues as it relies on other local Shanghai suppliers operating under the same conditions.

The market is yet to get a full measure of the impact that the Gigafactory shutdown will have on the auto giant’s second-quarter capacity.

Shares of TSLA have gained 25.3% over the past year against its industry’s 4.9% decline. 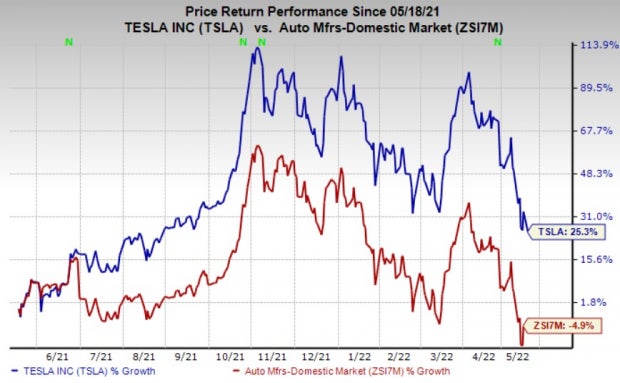 BRP Group has an expected earnings growth rate of 9.2% for fiscal 2023. The Zacks Consensus Estimate for current-year earnings has been revised around 7.2% upward in the past 60 days.

BRP Group’s earnings beat the Zacks Consensus Estimate in all of the trailing four quarters. DOOO pulled off a trailing four-quarter earnings surprise of 68%, on average. The stock has declined 4.9% over the past year.

Dorman Products’ earnings beat the Zacks Consensus Estimate in three of the trailing four quarters and missed in one. DORM pulled off a trailing four-quarter earnings surprise of 3.1%, on average. The stock has lost 0.7% over the past year.

Standard Motor has an expected earnings growth rate of 1.4% for the current year. The Zacks Consensus Estimate for current-year earnings has been revised around 2% upward in the past 60 days.

Standard Motor’s earnings beat the Zacks Consensus Estimate in all of the trailing four quarters. SMP pulled off a trailing four-quarter earnings surprise of 40.34%, on average. The stock has lost 15.7% over the past year.