The Homax Tex Pro Texture System’s innovative pre-mixed cartridges have 70% faster use, saving professional contractors time and money on the jobsite versus traditional hopper sprayers, including time-consuming setup and cleanup. The system is also made 60% lighter than traditional sprayers when full and has a two-handed grip, which allows for greater ease of use. The Homax Tex Pro Texture System makes texture application a one-person job, facilitating jobsite productivity and efficiency.

The innovative sprayer system’s two-handed neutral grip distributes weight for effortless operation compared with a top-heavy traditional hopper. Its no-spill, cartridge-based design lets users easily apply texture to both walls and ceilings at any angle. Conventional hoppers have an open top and require users to climb a ladder and bend backward to texture a ceiling. Homax Tex Pro Texture System’s ease of use is expected to help professional contractors complete jobs efficiently.

Shares of the company have declined 32% in the past year compared with a 10.1% decline of the industry. 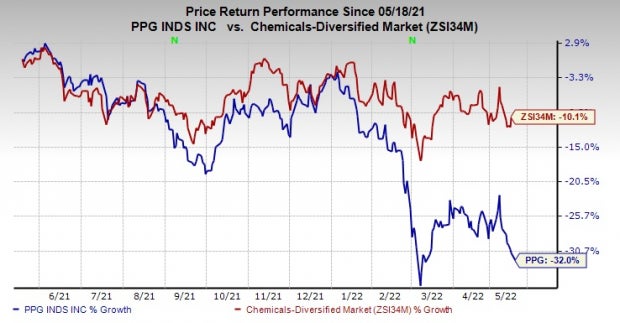 In its last earnings call, the company stated that it sees overall underlying demand for its products to remain strong, including sustained recovery in certain end-use markets. It also expects further volume growth in automotive refinish and aerospace coatings businesses in the coming quarters.

PPG Industries projects earnings per share (EPS) of between $1.44 and $1.74 for second-quarter 2022. Adjusted EPS is expected in the range of $1.60-$1.90, excluding amortization expenses of 14 cents and costs related to earlier approved and communicated business restructuring of 2 cents.

The company expects aggregate net sales volumes to be down a low-to-mid-single-digit percentage on a year-over-year basis in the second quarter.

Nutrien has a projected earnings growth rate of 161.9% for the current year. The Zacks Consensus Estimate for NTR's current-year earnings has been revised 38.8% upward in the past 60 days.

Nutrien’s earnings beat the Zacks Consensus Estimate in three of the last four quarters, while missing once. It has delivered a trailing four-quarter earnings surprise of roughly 5.9%, on average. NTR has rallied around 66.1% in a year and currently sports a Zacks Rank #1 (Strong Buy). You can see the complete list of today’s Zacks #1 Rank stocks here.

Albemarle’s earnings beat the Zacks Consensus Estimate in each of the trailing four quarters, the average being 22.5%. ALB has gained 42.1% in a year. The company flaunts a Zacks Rank #1.

Cabot’s earnings beat the Zacks Consensus Estimate in each of the trailing four quarters, the average being 16.2%. CBT has gained around 10.4% over a year.