Here's Why You Should Retain Hilton (HLT) Stock For Now

Hilton Worldwide Holdings Inc. (HLT - Free Report) is likely to benefit from expansion efforts, hotel conversion opportunities and luxury development initiatives. Also, focus on the loyalty program bodes well. However, a decline in revenue per available room (RevPAR) from the pre-pandemic levels is a headwind.

Hilton continues to drive unit growth to maintain its position as the fastest-growing global hospitality company. During first-quarter 2022, Hilton opened 76 new hotels. It also achieved net unit growth of nearly 7,800 rooms. During the quarter, the company opened the 500th hotel under its Homewood Suites (in the United States) and the 50th hotel under Hilton Garden Inn (in the Asia Pacific). During the quarter, the company boosted its development pipeline with two international deals under its Curio Collection (by Hilton brand), including the Royal Palm Galapagos (in Ecuador) and the Palacio Bellas Artes San Sebastian (Spain). For 2022, the company expects net unit growth of 5%.

Meanwhile, Hilton is focusing on hotel conversion opportunities to mitigate the impact of construction delays caused by the pandemic. During the first quarter of 2022, conversion signings were up 15% year over year and contributed nearly 20% to overall signings. During the quarter, the company signed conversion deals with Curio and Tapestry brands, covering destinations like the Galapagos Islands, San Sebastian, Spain, Maui and Sonoma County, California. The company stated progress with respect to DoubleTree expansion with new conversion properties across France, Germany and the Netherlands. Going forward, the company expects positive development trends to continue on the back of new development and conversion opportunities.

Hilton continues to progress in its luxury development strategy. During first-quarter 2022, the company made solid progress related to the Canopy brands. The company announced the opening of two new lifestyle hotels, including the Canopy by Hilton Boston Downtown and the Canopy by Hilton New Orleans Downtown. Backed by the strong openings, the company witnessed a sequential (and year over year) increase in its portfolio. Going forward, the company stated that it has 410,000 rooms in its development pipeline. Apart from this, the company emphasized on the expansion of its luxury and lifestyle portfolio with the signings of the Waldorf Astoria Sydney, the Conrad Austin Hotel & Residences and Canopy Properties in Cannes and Downtown Nashville.

The Zacks Rank #3 (Hold) company created one of the largest loyalty programs — Hilton Honors. With more than 133 million members, this network created an extremely valuable asset for the company. In the meantime, innovations such as the Hilton Honors app continue to drive growth. With membership levels increasing 15% on a year-over-year basis (as of first-quarter 2022), the company continues to outline opportunities to engage its Honors members through enhanced partnerships and points redemption offerings. 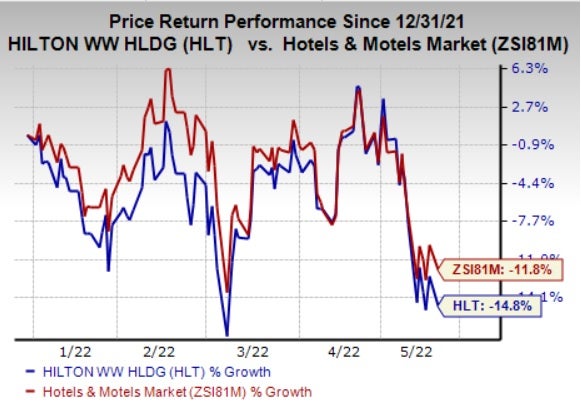 Shares of Hilton have declined 14.8% so far this year compared with the industry’s fall of 11.8%. The dismal performance was mainly due to the coronavirus crisis. During first-quarter 2022, the company’s performance was affected by Omicron-related demand pressures (in January and February). Travel restrictions and reimposed lockdowns in China added to the downside. Although the majority of the properties have lifted or eased restrictions, RevPar is still lagging behind pre-pandemic levels. In 2022, the company anticipates RevPAR to decline 5-9% from 2019 levels. We believe that the emergence of the new COVID-19 variants is likely to create volatility in demand.

Civeo sports a Zacks Rank #1 (Strong Buy) at present. The company has a trailing four-quarter earnings surprise of 1,565.1%, on average. Shares of the company have increased 59% in the past year. You can see the complete list of today’s Zacks #1 Rank  stocks here.

The Zacks Consensus Estimate for CVEO’s 2022 sales and earnings per share (EPS) suggests growth of 12.5% and 1,450%, respectively, from the year-ago period’s levels.

Bluegreen Vacations sports a Zacks Rank #1. BVH has a trailing four-quarter earnings surprise of 85.9%, on average. The stock has increased 21.2% in the past year.

The Zacks Consensus Estimate for BVH’s current financial year sales and EPS indicates growth of 11.2% and 35.1%, respectively, from the year-ago period’s reported levels.

Funko sports a Zacks Rank #1. FNKO has a trailing four-quarter earnings surprise of 78.7%, on average. Shares of the company have declined 24.2% in the past year.

The Zacks Consensus Estimate for Funko’s current financial year sales and EPS suggests growth of 26.8% and 31%, respectively, from the year-ago period’s reported levels.