Seagen Inc. (SGEN - Free Report) announced that its current chief executive officer (“CEO”), president and member of board of directors, Dr. Clay Siegall, has resigned from all of his current positions.

Shares of Seagen were up 5.1% on Monday following the announcement of the news. The stock has lost 7.8% so far this year compared with the industry’s decrease of 25.2%. 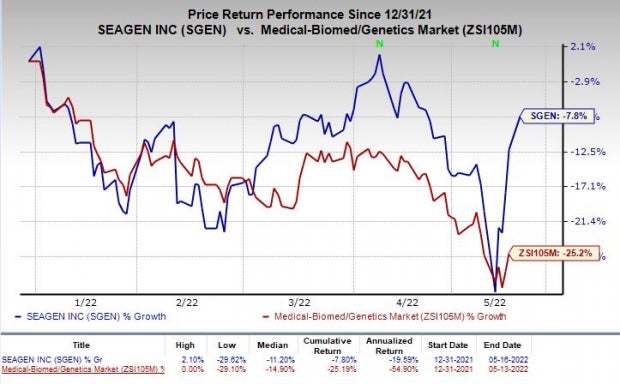 Last week, the company announced that Dr. Siegall was on a leave of absence after he was allegedly arrested for an incident of domestic violence. The company formed a committee of independent directors to conduct a thorough investigation into this with the help of an independent law firm.

Per the latest press release, the resignation of Siegall was not driven by findings from the investigation and is in the best interests of Seagen and its stakeholders.

Siegall, who also happens to be a co-founder of Seagen, has helped the company evolve into a leading developer of transformative cancer medicines that boasts of a strong pipeline of innovative therapies.

These drugs have witnessed strong uptake, with Adcetris being the majority contributor to Seagen’s top line.

Several label expansion studies on Adcetris, Padcev, Tukysa and Tivdak are currently underway, wherein a potential approval is likely to drive sales further in 2022 and beyond.

Though Seagen is making good progress with its portfolio of marketed drugs, it remains to be seen whether the new CEO the company brings in is able to continue the impressive growth trajectory and drive revenues further in future years.

It also remains to be seen whether the CEO transition affects the ongoing studies that Seagen is currently conducting. A potential delay in the data readout timeline of the same might leave an adverse effect on the stock.

Earnings of Applied Therapeutics have surpassed estimates in two of the trailing four quarters, met the same once and missed the same on the other occasion. APLT delivered an earnings surprise of -0.67%, on average.

Earnings of AegleaBio Therapeutics have surpassed estimates in two of the trailing four quarters and missed the same on the other two occasions. AGLE delivered an earnings surprise of 9.47%, on average.

Earnings of EyePoint Pharmaceuticals have surpassed estimates in one of the trailing four quarters and missed the same on the other three occasions. EYPT delivered an earnings surprise of -5.80%, on average.