Here are the key takeaways from the quarterly reports of these EV upstarts.

1.Rivian incurred a net adjusted loss of $1.43 a share in the first quarter of 2022, narrower than the Zacks Consensus Estimate of $1.50. The bottom line also compared favorably with the year-ago quarter’s loss of $4.10 a share. Total revenues came in at $95 million, missing the consensus mark of $114 million. The company produced and delivered 2,553 and 1,227 vehicles in the quarter. RIVN generated a negative gross profit of $502 million during the quarter under review. Operating expenses totaled $1,077 million, up from $410 million incurred in the comparable year-ago period.

Rivian ended the quarter with $16.4 billion in cash and cash equivalents. Capex for the first quarter totaled $418 million. Given the higher year-over-year net cash used in operating activities and massive capital spending, Rivian witnessed a negative free cash flow of $1,452 million in the first quarter of 2022, which deteriorated from negative $802 million during the corresponding period of 2021. RIVN aims to deliver 25,000 vehicles this year. It forecasts negative adjusted EBITDA of $4,750 million for 2022. Capex is envisioned at $2,600 million.

2.Lordstown incurred first-quarter 2022 adjusted loss of 46 cents a share, narrower than the Zacks Consensus Estimate of 49 cents. The bottom line, also, compared favorably with a loss of 72 cents per share in the comparable year-ago period. The company is not yet generating any revenues. Operating expenses for the quarter under review came in at $87.8 million, declining 17% year over year. During first-quarter 2022, RIDE spent $21.9 million in capital expenditure.

Lordstown exited the quarter with a cash balance of $203.5 million. The company expects to produce and sell as many as 2,500 Endurance pickups in 2023. This year, it expects to sell 500 units. RIDE notified that despite the ongoing supply chain snarls, it targets to commence commercial production and sales of Endurance trucks in third-quarter 2022.

3. ElectraMeccanica incurred first-quarter 2022 loss per share of 15 cents, wider than the consensus mark of 13 cents. This Canada-based EV manufacturer generated revenues of a little more than $1 million, higher than the year-ago figure of $183,589 but missing the consensus mark of $2 million. Gross loss was $1.9 million, deteriorating significantly from the year-ago level of $32,017.

ElectraMeccanica commenced deliveries of the SOLO vehicles during the last quarter of 2021. The total number of production SOLOs that it produced as of Mar 31, 2022 is 461 units. SOLO had cash and cash equivalents, and short-term deposits of $194.6 million as of Mar 31, 2021. For the quarter under discussion, the firm’s R&D and G&A costs totaled $4.7 million and $8.6 million, up from $2.3 million and $4.5 million, respectively, in the corresponding period of 2021.

4. Canoo incurred first-quarter 2022 adjusted loss of 54 cents a share, wider than the Zacks Consensus Estimate of 50 cents and also deteriorating from the prior-year loss of 7 cents. The company is not yet generating any meaningful revenues. For the quarter under review, the firm incurred operating expenses (R&D and SG&A) of $138.1 million, up from $94.9 million in first-quarter 2021.

Net cash used in operating activities was $120.3 million for 2021 compared with $54 million in the comparable year-ago period. As of Mar 31, Canoo had cash and cash equivalents of $104.9 million. For second-quarter 2022, GOEV projects operating expenses in the $95-$115 million range. Capital expenditure is projected in the band of $85-$105 million.

5. Workhorse incurred first-quarter adjusted loss of 15 cents a share, wider than the consensus mark of 12 cents. This Ohio-based firm had posted a loss per share of $1.04 in the year-ago quarter. Sales (net of returns and allowances) came in at $14,299, down from $521,060 in the year-ago period.  Gross loss in the first-quarter narrowed 31.5% on a year-over-year basis. SG&A and R&D expenses for the quarter under review totaled $11.9 million and $4 million, up from the year-ago period’s $6.8 million and $3.8 million, respectively.

Workhorse intends to begin production of W750/W4CC delivery vehicles in the third quarter of 2022. Production of the W56 vehicle is set to commence in the third quarter of next year. It plans to start manufacturing W34 vehicles in 2024. As for C1000, WKHS is set to repair 161 previously manufactured vehicles produced to date by the end of this year. It will also build an additional 50-75 C1000s by year-end. As of Mar 31, Workhorse had approximately $167 million in cash and cash equivalents. 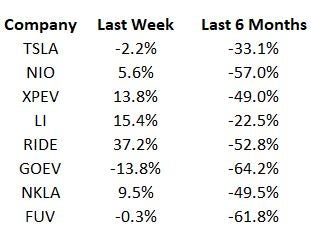