The biotech sector has been in the spotlight in the past week, with regular pipeline and regulatory updates.

Regulatory Update From Gilead:  Gilead Sciences, Inc. (GILD - Free Report) announced that the FDA has lifted the clinical hold placed on its investigational new drug application (IND) to evaluate injectable lenacapavir for HIV treatment and HIV pre-exposure prophylaxis (PrEP). In December 2021, the FDA placed a clinical hold on the use of injectable lenacapavir in borosilicate vials in all ongoing clinical studies for HIV treatment and HIV PrEP.

The hold was due to emerging concerns about the compatibility of vials made of borosilicate glass with lenacapavir solution, which could potentially lead to the formation of sub-visible glass particles in the solution of lenacapavir. The FDA took the decision following its review of Gilead’s comprehensive plan and corresponding data on the storage and compatibility of lenacapavir injection with an alternative vial made from aluminosilicate glass. Consequently, screening and enrollment of study participants and the dosing of injectable lenacapavir can continue.

CheckMate -901 is a phase III randomized, open-label study evaluating Opdivo in combination with Yervoy (primary study) or Opdivo in combination with chemotherapy (sub-study) compared to standard-of-care chemotherapy alone in patients with untreated unresectable or metastatic urothelial cancer. The primary study failed to meet the primary endpoint of overall survival (OS) in patients whose tumor cells express PD-L1 ≥1% at the final analysis.

Nevertheless, an independent Data Monitoring Committee recommended that the trial continues to assess other primary and secondary endpoints. At this point, Bristol Myers remains blinded to the data.

BridgeBio Gains on Bristol Myers Deal: Shares of BridgeBio Pharma, Inc. (BBIO - Free Report) gained after the company announced an exclusive license with Bristol Myers to develop and commercialize BBP-398, a potentially best-in-class SHP2 inhibitor, in oncology. BridgeBio is eligible to receive up to $905 million, which includes an upfront payment of $90 million and up to $815 million in additional milestone payments and royalties. The deal expands the earlier agreement between BridgeBio and Bristol Myers to study BBP-398 in combination with the latter’s immune-oncology drug Opdivo (nivolumab) in advanced solid tumors with KRAS mutations.  BridgeBio will continue to lead its three current phase I monotherapy and BBP-398 combination therapy studies with additional support from Bristol Myer, while future clinical trials will be conducted and funded by Bristol Myers.

Chimerix Down on Emergent Deal: Shares of Chimerix (CMRX - Free Report) were down after the company announced the sale of smallpox drug Tembexa to Emergent BioSolutions (EBS). In June 2021, the FDA approved Tembexa tablets and oral suspension for the treatment of smallpox. Under the terms of the agreement, Chimerix will receive $225 million upon closing of the transaction plus up to $100 million in up to four $25 million milestone payments. Each milestone payment is contingent upon the exercise of future BARDA procurement options of Tembexa following the base period. Investors were disappointed with the deal as Tembexa was its only approved product.

Along with its earnings release, Chimerix announced that it is planning to limit its investment in a retrospective Natural Disease History (NDH) study of recurrent H3 K27M-mutant glioma to support a potential approval for its lead pipeline candidate, ONC201. The company is developing the candidate to treat recurrent gliomas that harbor the H3 K27M mutation.

The Nasdaq Biotechnology Index has gained 10.14% in the past five trading sessions. Among the biotech giants, Moderna has gained 15.27% during the period. Over the past six months, shares of Moderna have lost 41.26%. (See the last biotech stock roundup here: Biotech Stock Roundup: REGN, VRTX Earnings Update, BHVN Up on Regulatory News) 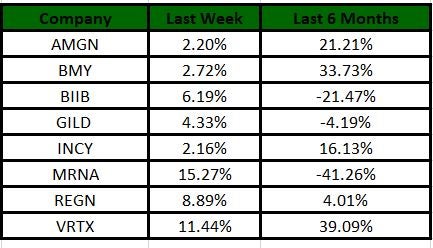 Here's Why You Should Consider Investing in 3M (MMM) Stock